At the age of seven, I was hooked on the Olympics even if I had to watch it on a black and white television set.  This year, I had a rough time enjoying it because I don’t have a love for Curling. My wife and I were forced to watch the Olympics in Scotland. We weren’t kidnapped, but customs made us feel as though we were.

I’d prefer curling the lack of my hair as opposed to watching it in the Olympics.  However, the Scottish announcers were downright funny, which, in the middle of the night, provided entertainment. The announcers were relentless with their observations taking it to a point where at times thought we were watching Saturday Night Live.   I will provide some quotes which I noted.

This was downhill skiing : “That guy looked like he was getting on a new bike with no pedals on Christmas.”

Seriously, it felt as if you were watching commentating from two guys at a Scottish pub.

Snowboarding:  There was a crash, and rather than wondering if their health was intact, they stated, laughing and quite loudly I might add, “These are two birds well crushed out”.

An additional snow skiing moment: We witnessed a crash that looked as if someone could have been critically injured.  The drunken commentators screamed with excitement.  “Oh wow! (laughing and slapping themselves on the shoulders). “That looked  like Evil Kenieval, Mate”. 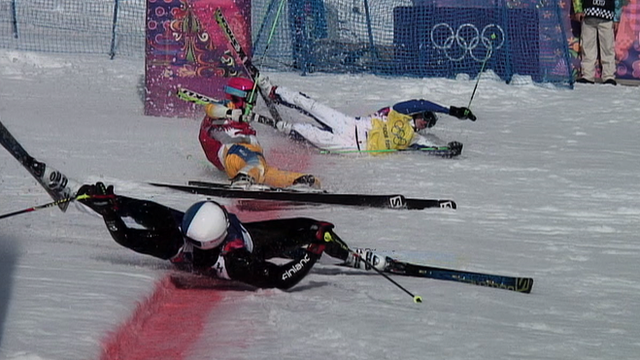 Hilarious photo finish for ski cross event, per the BBC One Scotland commentators. It really was hilarious if you think breaking legs and ribs is funny.

Snowboarding again and another crash:  “Those snow boarders crossed flailing like a cat of nine tails.”

After an Olympic athlete’s dream was demolished, they would stagger down and ask, “What were you thinking?”

My wife and I would look at each other laughing and wonder what the hell they meant and then wondered how many pints they had absorbed before this magnificent event.  Since nobody died, it was good to be in  the magically goofy land of Scotland.