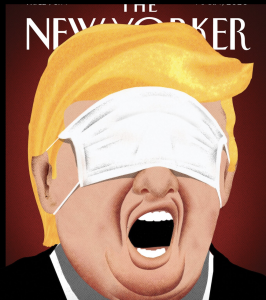 Although these are delicate subjects, I may still approach them with poor taste.  Voting during this time is absolutely necessary, and is not difficult.  Providing a “Write In” candidate on the ballot isn’t difficult either, particularly as an alternative to our current President.  Witnessing someone enter “Corona Virus” as a Write In entry for the Republican candidate was interesting. I shouldn’t have been looking at her ballot, but she highlighted it with stars as well as a skull and crossbones.  If I knew her, I would have suggested a Mr. Yuck sticker.  One could discern she, literally, wished this virus to defeat the POTUS.  It didn’t make me laugh, but it did make me think.

I can’t sit at this computer and pretend I know much about politics like I know baseball and people in general.  Sometimes, I’ll humor those who attempt to engage me with banter about politics.  If we agree, the conversation may last a few minutes.  If we don’t, I diffuse the subject within seconds unless I feel, even if I disagree, they may have a valid point.  I must then proceed to enlighten them with a fart….not literally, but in a manner where the conversation can either continue with something a little more light hearted, or end with the slam of the phone.  Actually, we can’t even do that anymore because of cell phones.  They are far too precious, and, more importantly, expensive.  (I miss those land lines. ) Think about it.  If some disgusting cave dweller decides to fart in mid-sentence, you must change the subject, unless the conversation is about flatulence.

For no more than five minutes, I’ll listen to a politician on TV drone on in front of strange mobs chanting their names, and I wonder if they are just following those surrounding them or actually listening.  I may watch for seven minutes, but I can only listen for five.  This is when the viewer should have the right to dub in a fart to change the subject, or else I’m changing the channel.

People have the right to love or hate our President.  It’s an essential part of our Constitutional Rights.  It’s America.  However, it’s not always what makes America good or “Great” again.  The current POTUS is clearly a good politician, but in this case, he’s more of a good magician.  He convinces good people to believe in things that make even my dastardly eyes roll and generate “what the F are you talking about” looks.  This POTUS is a great magician, but he is not, and let me be clear, he is not a good man. In fact, I just think he’s abjectly evil.  That’s just my opinion, and a little over the top to some, but I have the right to my opinion. I’ve witnessed him turn friends into enemies and brothers and sisters who once unconditionally loved one another question that love.  What’s good or great about that?

After doing something stupid, which I commonly do, I will remind my wife that I am a good man, I’m just not a very good wizard.  She laughs and agrees.  I’m also extremely good at apologizing, because I’ve had to do it frequently over the course of my 47 year career as a human.  Can you imagine the POTUS apologizing for anything?  No.  That’s flat out shameful.

Contrition is a valuable commodity.  Embrace it.  (Let’s not even start talking about humility….HA!) Admit when you’re wrong and repent when you are wrong again.  I don’t think that’s in the Constitution, but it should be.  It usually garners some form of respect, for which I have none of for the POTUS.