If you really want my money, sell me a car or invite me to be in your Fantasy Football League.  In full testosterone gear, the 2014 Fantasy Football Season is in its ninth week, forcing me to recall some of the several thousand silly mistakes I’ve made in my life.

I currently own a car and a fantasy football team.  Each of them cost me money and respect.  They also require maintenance.  The car needs oil, much like I need the money to buy a computer, enter a fantasy league and place my gridiron gladiators in grave positions in which the team will ultimately fail.  The process of selecting a quality fantasy football team or a reliable car, according to your personality, are additionally similar.  My personality maintains an uncommon balance of impatience and abject stupidity.  For example, it took exactly thirty minutes for Carlson the Car Salesman to convince me to roll a particular car off of the lot.  The last fantasy football team I acquired took me a mere thirty minutes to assemble.  With this evidence, one may surmise that I have a tendency to dismiss the detailed research many others find necessary in the decision making process.

Shortly after beginning my first career, I purchased an automobile the very same year I was introduced to fantasy football.  Their demise ended in similar fashion.  Within my budget, the car seemed to be a reasonable deal.  It was advertised as having four wheel drive, power windows, locks, and according to the speedometer, only one hundred and twenty miles on it.  Come to find out, that speedometer was way off.  It only WENT to one hundred and twenty.  The four wheel drive was only two wheel drive, the defrost worked primarily in the summertime, and the air conditioner limited its availability to the winter. To drive a short story an even shorter distance, the truck ended up in the valley of misfit automobiles. 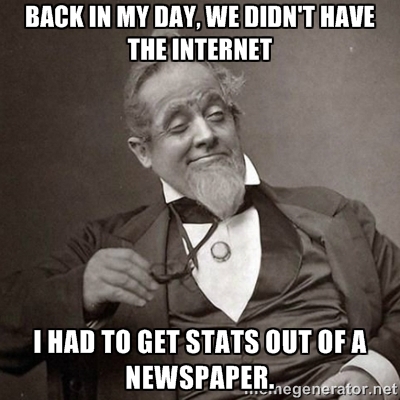 As a first time owner of a fantasy football team in 1996,  I thought I could choose a team wisely and with terrific courage.  To help the process of developing a formidable team, I used a Fantasy Football cheat sheet I found in a nationally recognized sports periodical. That’s also where I thought I found my wisdom.  On draft night, while swilling beer and after choosing my number one pick, a running back, I learned a quick fantasy league lesson.  This lesson was much quicker than any running back in this draft…..especially mine. Once you choose your player, under no circumstance are you allowed to reconsider your pick.  No matter what the scenario, you are stuck.  After making my decision, one of the more competitive assholes participating in the draft let me in on an important detail regarding my player’s success.  He was dead.  Evidently, one month prior to this draft, he had been shot and killed in a nightclub.  The periodical I was using had been available in print one week before the player’s last rights were given.  Some of the competitors thought this was hilarious….. not the man’s death, of course, but over the notion I would make such a colossally horrific choice.  Personally, much like holding on to a live hand grenade, I found it quite courageous.

Here’s a tip:  Don’t take any of my advice……about anything…….ever.