Without trying to be funny, Britt and I are witnessing the evolution of man, woman, and culture here in India.  This country is simply Harlem without the vim and vigor.  They just toss in a few Temples and Palaces here and there like salt and pepper and expect you to say “ahhh”.

On the way to the Iskon Temple this morning, I stopped by a terrifying amusement park.  It is called, “Taxi Drivers, Motorcycles, Pedestrians and You can’t Take a Picture Land”.  Fortunately, no one carries guns in Bangalore, or I would have a cap popped in my ass like the ending of Butch and Sundance or the Godfather.

While attempting to catch a picture for anyone who cares, whistles would blare, Temples would shake, and Hare Krishna would slap me across the face.  It was a lot like growing up with 12 older sib 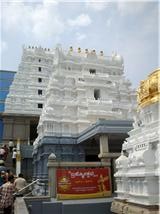 The Temple was glorious.  Prior to witnessing the Temple without my shoes, which my cab driver forced me to leave in the car, the one hour of chanting as the only white person being stared at in this line was a bit unnerving.  The line to enter the Temple was just like waiting for an extremely depressing Disneyland ride.  It would be called, “Bare Feet and the Wild Walk.” Yet, the five minutes of observing the Temple and almost being arrested for taking a picture within was well worth it.

Being accused of demoralizing India from some of my friends and enemies, I wish to say a few words.  The people here are great; I respect their culture, some of their attitudes, and most of their driving skills. Further respect should be paid to the magnificent country of India. If I had it, I’d dispose of a Slumdog Billion dollars not to have to drive a car in this beautiful nation.  I would have perished the first day if I had done so.