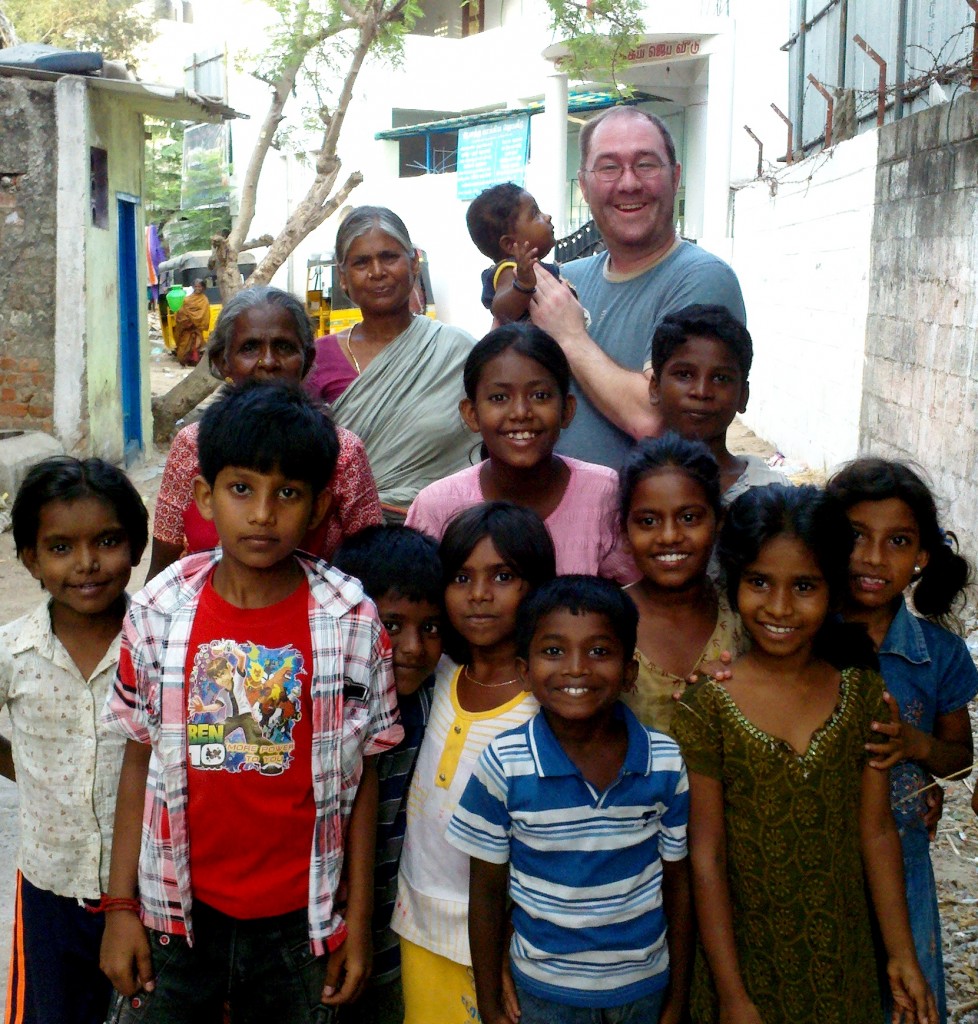 While semi communicating in India via e-mail with my brother, Tom, he asked me if I had experienced anything here resembling the movie “Slumdog Millionaire”.  He was referring to the culture, not the television show representing nothing about this culture.  I couldn’t quite respond to Tom with a “yes” even after spending 7 days here.  Ironically, the very next day, Britt and I experienced something similar, yet this experience seemed far more powerful…..since it was reality.

Sarcasm and cynicism is in my blood.  For Gannons, it is sometimes our nourishment.   Without it, we tend to be far too emotional….sort of the “if I weren’t laughing, I’d be crying” scenario.  This is a ridiculous statement because we are all wildly fortunate.  Positively reinforcing this notion is witnessing the living standards here in India.

Within my writing and former blogs, I have commonly amused myself and others as well as offended some by making fun of India’s culture.   My simple writing is meant to entertain.  This particular blog is not meant to degrade any form of human existence, and it has no comedic significance.  Rather, it is an eye opening and closing, heartfelt, perhaps life changing recognition of how wonderful life is, whether you have everything or whether you have nothing.

After 7 days in Bangalore, Britt and I took a flight to Chennai, India, located on the Bay of Bengal.  In Bangalore, recognized as the garden spot of India, when mentioning our next destination of Chennai, people of Bangalore would cringe and say “very hot and stay in hotel”.  Considered one of the hottest and more poverty stricken cities in India, we knew, quite certainly, it may be a tremendously long 5 days.   Needless to say, our adventurous excitement level went from 1 to none.  However, with regard to the first day in Chennai, our expectations, most definitely for me, elevated from a level of none to love.

Flying from Bangalore to Chennai was a meager 40 minutes.  Passing through customs, security and rude humans required an additional three hours of anger, balanced with 4 hours of patience.  Britt and I handled it all beautifully (this will be another blog) and we arrived safely in Chennai.   My wife, Britt, seems to fear nothing when traveling abroad.  Therefore, I fear only some things: her life and mine.

Traveling an hour in a cab, suffering from pinching hot conditions, Britt located our hotel before the cab driver.  Always making me chuckle, my wife is capable of locating geological areas in a foreign country after being there for an hour before taxi drivers, living here for a thousand years, are able to do it in a thousand years.  I refer to it as her BPS. ( Brittney Positioning System )

As everyone knows, after traveling for 5 minutes or 5 days, it’s always a relief to check into 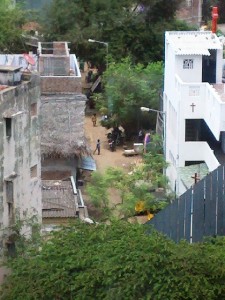 Soon after checking into our hotel, I went to the window and, peering out of our third story room, I witnessed two scenes which most of us could only describe from a movie.  Changing my idiotic and offensive perspective on life as we think we know yet don’t know it, I removed the joking and the seemingly witty quips replacing them with silence.  For almost an hour, my observations occurring on this dirt ridden path enveloped me with interest and desired inclusion.

A boy, maybe 8 or 9, along with his sister, probably 6 or 7 were attempting to ride a bicycle for the first time without a father figure or brother to assist.  Britt looked at me and told me with her eyes I was not to interfere with what happens in this area, as told by security.

Six or Seven boys were participating in a Cricket game on the same dirt alley.  Rather than speaking to my wife with pleading eyes, I told her of the backyard wiffleball games Tom, Greg, Aaron, I and whomever wished to play in the neighborhood would participate in countless days when there wasn’t snow on the ground. This cricket scene reminded me of those fabulous days.  Britt still suggested, upon orders of  hotel monarchy, I should remain in the room.  Just then, I saw the young boy trying to ride a bike for the first time take a spill.  He was wearing pink pajamas, and his sister was laughing at him.  It was then when I told Britt, I was going to teach a boy how to ride a bike and show these cricket clowns how to throw a ball and swing a broken fence post.  (They don’t have the money to buy a bat or a real ball)

Getting past security was easy.  They simply said, “You’re on your own”.  Gaining the trust of the children was a little more difficult.  I requested they let me play, and they accepted, trying to hide their smiles.  The children gave me the wooden fence post and chuckled, knowing a cracker like me would embarrass myself.  I did not disappoint.  The India version of “chuck a ball at me” even a juiced up Barry Bonds couldn’t have hit.  I missed it by about five feet.  They laughed hysterically at my insufficiency with the fence post.  Keep in mind, I have only hit a ball zero times when it is supposed to skip off the ground before you take a hack at it.  This is cricket.  Requesting one more chance at making contact with the ball, the children relished the chance of, yet again, demoralizing this paleface from Spokane, Washington.  I hit the next pitch into outer space, or in their terms, beyond where we could retrieve it.  They cheered more for my success than they did for my failure.  That’s when I fell in love with them.

I decided not to try my luck any further with the lumber, but I played catch with them, pitched to them, and we communicated not with words but, rather, high fives, fist pumps, smiles and laughter.   After close to 15 years of teaching, that one hour of sweat, smiles and laughter ranks amongst the top.

Britt could see me playing with them, but she was a bit concerned with my safety.   I returned to the room to receive a lecture from Britt (she never gives me lectures) Instead, the first words out of her mouth were, “I love you”.  That’s when I knew I could convince her to meet these children and take this picture.   The only deal was that she wants to adopt the smiling cute child with the blue and white striped shirt in the front of the picture.  He was hilarious.

Some of the elderly ladies witnessed the fun we were having and wanted to show us their grandchildren.  They were all extremely sweet and adored Brittney’s blond hair.  It’s funny, we learn universal languages and some of the words are tainted with hatred.   All of us in this “slum” didn’t speak one word the other would know.  Yet, there was no poor sportsmanship of any kind.  They were simply pleased to play a game and return to their homes for a humble dinner.

Initially, amongst the laughter, concrete, dirt and fun, watching the children crawl through windows, 8 or 9 at a time, my heart sank.  The only time I have to crawl through a window is if I lock myself out of my own house.  Following this experience, my heart rejoiced hearing the boys and girls laugh while hopping through the windows of those dilapidated shelters waving Britt and me goodbye.

There’s nothing better than seeing a smile on a child’s face or hearing laughter from their belly.  Perhaps, they do have more than us.

I never taught the boy and his sister how to ride a bicycle.  However, they remained cheerleaders on the side dirt.  Speaking of teaching, I learned far more from all of them than they could possibly learn from me.