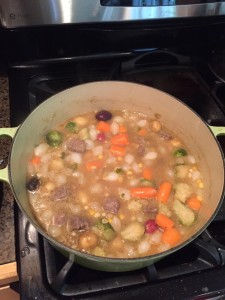 For Mother’s Day, I decided to make a stew.  I didn’t do it for my mother.  Rather, I did it for a dog.  Seeking the proper ingredients necessary for a hearty stew, I visited the local farmer’s market bagging fresh carrots, garlic, peas, corn, pearl onions, yukon gold potatoes, brussels sprouts, and, of course, stew meat.  I had to drop by a common store for the stock.  We will share this stew with our dog, Jack, because that’s what my mom would want.

Even when our mother was cooking stew for eight to ten people at a time, including a few others who had moved out of the house, she still saved some for our dog, Bolivar.  It was beautiful to witness her care so much for a dog, as though he was one of her own litter.   It was beautiful right up to the point when one of her sons, working and living outside the house, yet remaining in the same zip code, could smell the stew from afar.

Left over stew simmering on the stove for Bolivar, my mother was probably doing laundry, dusting, windexing every window in the house, vacuuming, or praying for a break when an intruder slipped into our house and ate our dog’s lunch.  She caught him with a mouthful and read him a prison riot act. (This was very uncommon for my mother to read riot acts.)  It was our brother, Steve, who had a knack for smelling and eating everything edible, even if it was meant for a dog.

Our mother loved and cared for anyone walking on two legs or four, but she was also very fair.  Steve had probably eaten twice that day before lunch, and mom knew it.  Bolivar deserved that meal, and Steve, good soul that he is, was shamed into cooking another stew for a hungry dog.