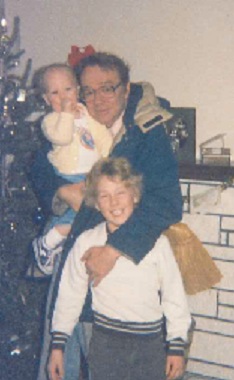 Our father was a humble man.  He was an executive who would adorn a forty seven year old smoke stained jacket just after removing his powder blue suit.  Equally as humble, our mother would become embarrassed by the cigarette stains and burns on that dreadful jacket.  Our father did these things deliberately.   He wished to look like a bit of a bum after wearing a suit and tie ten hours a day, just to get a bit of a rise out of his children or wife.  It was his way of making himself laugh.  Our mother didn’t always love it.  Some of my siblings didn’t appreciate it.  At our ballgames, a few of my brothers wouldn’t acknowledge him as our father.  Here’s a brief example:  Teammate to one of my brothers: “Who is that bum in the stands?”  One of my embarrassed brothers:  “I have no idea.”

My father’s work ethic was impeccable, so his stress level could boil over sometimes.  Additionally, being the father of thirteen children wasn’t always easy.   Our mother was his saving grace, but his keen sense of humor, sometimes just silly, relaxed him a bit.  His shenanigans made people chuckle, guffaw, or simply shake their heads.  His seven sons’  “Gannigans” sometimes landed them in jail. We weren’t as crafty as him. (Don’t take joyrides on tractors which aren’t yours, young men.) 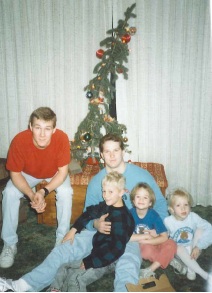 Onward to the Holiday season:  This always made my father, a very stern man, a little goofy and child like.  Our Father, Rodney, grew tired of purchasing Christmas trees.  He also grew tired of hanging lights on our fairly large home.  Therefore, he would find enjoyment further embarrassing his children and wife by ripping a branch off a backyard tree and saying, “This is what we’re having for Christmas this year.”  It stood proudly in front of our picture window for all the neighbors to see.  This was years before the sacred movie “A Christmas Story” graced our television sets.  Additionally annoyed by our next door neighbor’s festive stadium lights, Mr. Gannon developed a talent for unplugging those neighbor’s lights.  This was a bit of an annoyance for our next door neighbors.  Smoking a cigarette and peacefully saying the rosary, he would stroll into the neighbor’s yard and pull the plug.  That’s when the fun began for dad.  Finally, the sun went down in Spokane.   Fortunately, our neighbor had a good sense of humor.  After spending an hour checking every bulb on his house, he finally problem solved something quite simple.  Shaking his head, and rolling his eyes, knowing our father was the man who committed this terrible crime, he was capable of finding an outlet.  Then, he would drop by our house to share a beer with our father.

Dad was a pioneer of Christmas cheer, especially while attending mass on Christmas day.  We all attended church every Saturday night or Sunday morning.  We also attended,….let me rephrase that, stood  in church on Christmas and Easter.  Oddly, and statistically speaking, ( I can create a graph for this) people enjoyed dressing up and arriving in droves celebrating JC’s Birthday.  Dad had no problem with this.  Tom, Greg, Maggie, and other siblings did have an issue.  We didn’t understand, while faithfully attending mass, even when we were on vacation, being forced to stand at attention in the back, allowing ladies and gentlemen with white Q tips placed upon their heads to relax in a pew and pay no attention to the meaning of Christmas.

Babies crying and the elderly snoring during this sacred day really didn’t bother our dad.  With pious faces, dressed to the tenth, people( not his children) holding conversations during the service were what irritated our father. Very kindly, and only verbally, he would swing like a wild man.  He created a max exodus of college students thinking they could arrive at a church one day a year and not pony up any respect, or any money.  They didn’t recognize the word, “Tithing” or “Respect”.  Having very little money in college, I at least found a “buy one get one free Whopper”certificate from Burger King, and placed in the church basket of tithing goodies.  Forgive me father for I had no money.

I wish everyone a Happy Holiday Season.  And go to church, even if you have to allow an old bag to take your seat.  As you attend the Christmas service, you might heed my fathers advice: pray, don’t disrespect any religion, and shut the hell up for just one hour a week.

16 thoughts on “The Lighter Side of a Dad (Christmas Cheer)”