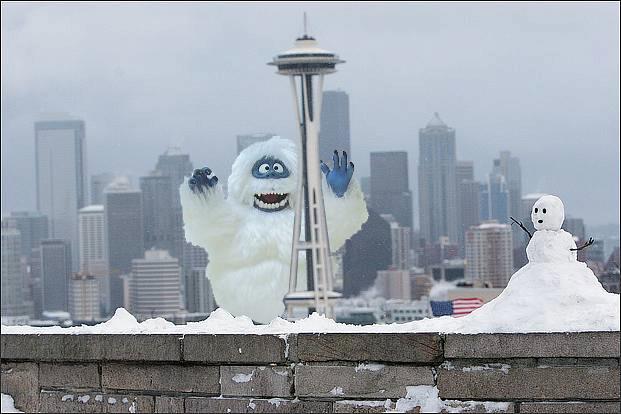 Living in Seattle, driving can become a little tricky, and one might say at times, maddening enough to send any calm and cool pacifist into a rage of gun wielding fury.  This is on any normal day, depending on when and where you are commuting and eventually committing a crime.  Toss in a snowflake or two, sprinkle in a few hundred thousand people never having driven in snow, perhaps from other countries, and it results in bedlam.  Or, if you will, as some weather analysts are describing it, (cue the music on any news station in Seattle)…..bum bum bum, “Snowmageddon”.

Refusing to play the old card of gently placing weathermen, or meteorologists under a bus, or a zamboni, I will do otherwise, because I find their job to be quite compelling and challenging, or most of the time, just stupid.  Mother Nature has a sense of humor for a reason.  She gets tired of people predicting the weather when, on an off night, maybe coming off a hangover, or perhaps involved in a marital dispute with Father Barstool, she just doesn’t have the time or patience to grant snow days for poor uneducated children and lazy teachers who look forward to those days more than Christmas.  (I was once one of those teachers)

I will, however, toss a few, “on site reporters” under my zamboni.  They are eerily similar to golf analysts using adjectives not necessarily fitting the occasion.  When someone makes an outstanding putt, it is not “courageous”.  When it is 32 degrees outside, the conditions aren’t “brutal”, especially when my wife, two dogs and I are wearing sweatshirts and ball caps tossing snowballs at our snow dogs in the back yard amidst this “brutal” day.  The word “cold” and the phrase, “My ears are a bit numb” seem more appropriate.  Additionally, when these reporters were using the word “brutal”, if they used that term around someone visiting from Great Falls, Montana where it is 20 below,  they might find themselves getting a shovel bounced off their exaggerating onions.  Twenty below!  Now, that’s brutal.  A hole in one!  Still not courageous, but quite amazing.  Those are my analogies for the day, but I must leave you with my last bit of weather rage.

On site reporters get tingly, (I don’t wish to use inappropriate language) when educating us simpletons regarding this bizarre white substance floating to the earth.

On Site Reporter:  “If I can just get you to pan the camera down here by my feet, this wet, but clearly visible flake of nature is referred to as snow.  It happens when Mother Nature has diarrhea, spends too much time in the bathroom, and doesn’t have time to turn up the cloud thermostat.  It also stays around longer than rain.  Rain is just Father Barstool pissing on everyone in Seattle who drives a BMW.  If it continues to snow, re-write your wills and pray that there is a Heaven.  Back to you, Mark.”

You learn about snow when you are about two years old, and most toddlers are not watching the news.  Rather, they are watching more important, and relevant shows like “Sponge Bob, I think I Crapped My Square Pants”.   Or, hopefully, they are out sledding with their parents, and the father is teaching him or her how to place a rock in a snowball, just in case they require some heavy artillery when facing the neighborhood enemies in a friendly snowball fight.

Oh yes, and by the way, you idiots, if you don’t know that it’s a little more safe to slow down in these conditions, you deserve to be in a ditch, as long as nobody gets hurt but you.

(This snow plow blog was inspired by my public relations manager, Vic Parcher, who is currently marketing a line of t-shirts well known in my office and certain bars as “Thrown Under the Bus Club………Are You a Member?”.  I, Ben Gannon, am the acting C.E.O.  If you’d like to purchase one, as of yet, you can’t.  We’re working on that, but if you’d like to observe one, for only five dollars and five minutes of viewing, you can witness one of these shirts encased in 3 inches of bulletproof glass at our home.  People in wheelchairs get in for 4 dollars and 50 cents, but can only stay for 4 minutes and 50 seconds.)