A gal I currently live with delivered an astute observation while in my presence the other day.  She realized, after spending the last seven years of her life with me, that she doesn’t recognize the traditional seasons quite the same.  Before I took her in as a boarder, it was simply Fall, Winter, Spring and Summer.  These seasons only determined what she needed to wear on any given rainy day in Seattle.  Influenced by her meatball roommate, she began not only thinking, but living outside the seasonal box.  The seasons should not be merely associated with the weather and holidays, but something deeper, something fun, something that can be clean and dirty at the same time, yet, with the right attitude, quite intriguing: Sports.

Sports replaced the seasons for me the day my brothers informed me Santa and the Easter Bunny were a couple of phonies.  Fall was replaced with football, Winter was replaced with basketball, and Spring and Summer with baseball.  With the 2016 NFL season closing, my  roommate had a question for me.  “What do we do until March Madness?”  Neither of us giving a crap about the National Basketball Association, since their regular season games are meaningless, it took me a moment to respond.  “I don’t know.  Maybe read a book?”  Working long hours at the landfill leaves her only enough time each night to eat a hearty meal before her eyes begin to droop.  On weekends, she devotes her time to our animals and others in our neighborhood.  Years ago, she was a voracious reader, but lately, books have taken a backseat to pets and balls.

After college basketball’s March Madness, she will begin planning her next season around baseball’s Spring Training in Arizona.  And, of course, following Spring Training, she will book tickets to Opening Day.  The rest of the summer will be plastered with backyard bbq and Mariner baseball taking us clear through to the World Series and the beginning of college and professional football.  I have found the perfect roommate. 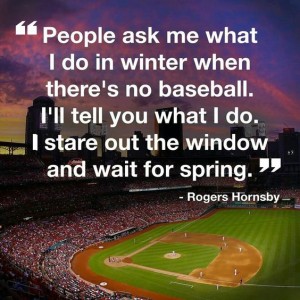