There are three things I love in life besides anarchy. I love my family, eating and laughing. The anarchists sometimes provide the latter. Disagreeing with all forms of government is fantastic, and I thoroughly enjoy those supporting the concept while, so hilariously, trying to make a point. Both the subject of anarchy and those spreading it around like “I can’t believe it’s not butter” makes me laugh. Justice is never served through ignorance, and protesting corporate greed while wearing masks purchased through the company with which you are protesting qualifies as ignorance. 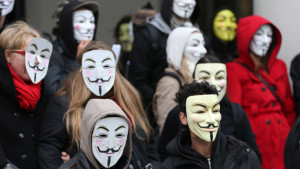 The Million “Mask” March was held last week in front of Amazon.com headquarters, and employees of Amazon were properly warned to not wear their badges when exiting their place of work last week. This march was commemorating Guy Fawkes, a poor soul, who designed the infamous Gunpowder Plot in 1605 with hopes of blowing up the House of Lords in London, because he didn’t much care for the bourgeoisie hanging around in England at the time.  I almost find it silly, and a little embarrassing when attempting to describe this less than momentous event. His attempt was an epic failure. Legend has it, even disabled children were laughing at him during the process. I’ve visited London and slept next to Lyndsey Buckingham Palace, and although I didn’t enjoy the pretentious environment, I had no intentions of blowing it up.

This is where the plot weakens.  While protesting the evil empire of Amazon.com, many of the protesters, in a mad rush to make it to the march, purchased their sinister masks from Amazon.  It was a less than shrewd move costing them money while placing their cash directly into Amazon’s hot pockets.