Chicago’s Wrigley Field: I don’t care if the account of this magnificent venue has been documented one thousand times, one hundred years ago, last week or yesterday.  For one day, I visited Wrigley Field, home of the hapless Cubs, and I soaked up every inning inside and outside the field.  Along with all the other visitors to Wrigley, I was a guest of honor.  That’s how it feels.

When my dad retired, after fathering 13 children (with his angel of a wife) and after fighting the war in Korea, someone asked him if there was anything specific he’d like to do in retirement.  (I believe he thought he’d pretty much done everything a very humble man could do.) Initially, I believed he merely wished to eat cheese and crackers with our mother while doing a crossword puzzle.  That, and take a much deserved nap followed by watching a game of baseball or “Murder She Wrote” on television.  But, when pressed, he answered, “I’d like to see Wrigley Field.”  Well, even suffering from severe scoliosis, he took the train to 1060 West Addison in Chicago Illinois, (home of the Chicago Cubs) from Spokane, Washington (home of several taverns).  Upon his return, he described it simply and beautifully.  “It was just what I’d hope to see, yet better.”

Years later, while celebrating Wrigley Field’s 100th year of baseball, I made this same journey, but by plane instead.  This stadium took me on a line drive time machine heading to baseball’s past. I remembered the stories my father would tell of Ernie Banks, Adrian “Cap” Anson, and Fergie Jenkins (all historically great Cubs baseball players). Back when I was a child, those names meant something to me, but I only thought of them as fictional characters you’d find in a storybook.  Before I even entered Wrigley, these characters came to life.  I would see their sculptures and remember how dad showed me how they swung the bat or fielded a ball.  It all made sense to me.  These ballplayers and this stadium didn’t provide wins, but they provided happiness in an era where perhaps anyone else in America wanted to be one of those ballplayers.

Even if you don’t like or love the game of baseball, attending this area when the Cubs are in town to play becomes more than a stadium.  Rather, it becomes an experience.  Before soaking up any beer, I soaked up its beauty.  Before eating a sausage, prior to entering the park, I ate up the personalities surrounding it.  Those outside the park could spot those who had never been in Wrigley.  It would be the most affable introduction from the most random of pedestrians.  “Hey, you ever been here before?”  “No.”  “Oh, you gotta go to this place over here before the first pitch.  You’ll love it, and you’ll love the stadium.  Go Cubbies!”  It was the finest thing I’ve known, because, commonly, we don’t believe people are sincere without selling something.  He genuinely wasn’t selling anything but his beloved city and the Cubs.

When finally entering the stadium, I felt like I was at the most affable coliseum in Rome.  It was also the closest seat to the bat wielding gladiators only wishing to bash a ball instead of a skull.  Quite honestly, I felt as if I were at a triple A stadium watching major league players.   Everyone is that close to this beautifully manicured park……so close, you can smell the pine tar on the players’ bats and get sick to your stomach while watching them cram chewing tobacco into their mouths.  Three rows below, you look at the hotdogs or mouth savoring sausages as though they are Christmas Eve, Christmas Day and the day after dinner.  The broken nutshells at your shoes make them look like ruby brown slippers.   The Ivy outfield walls make you feel as though you are in your backyard, but with thousands of people cheering for you instead of  your mother yelling at you to come in for supper.  For one day, one was better.  Sorry, mom. 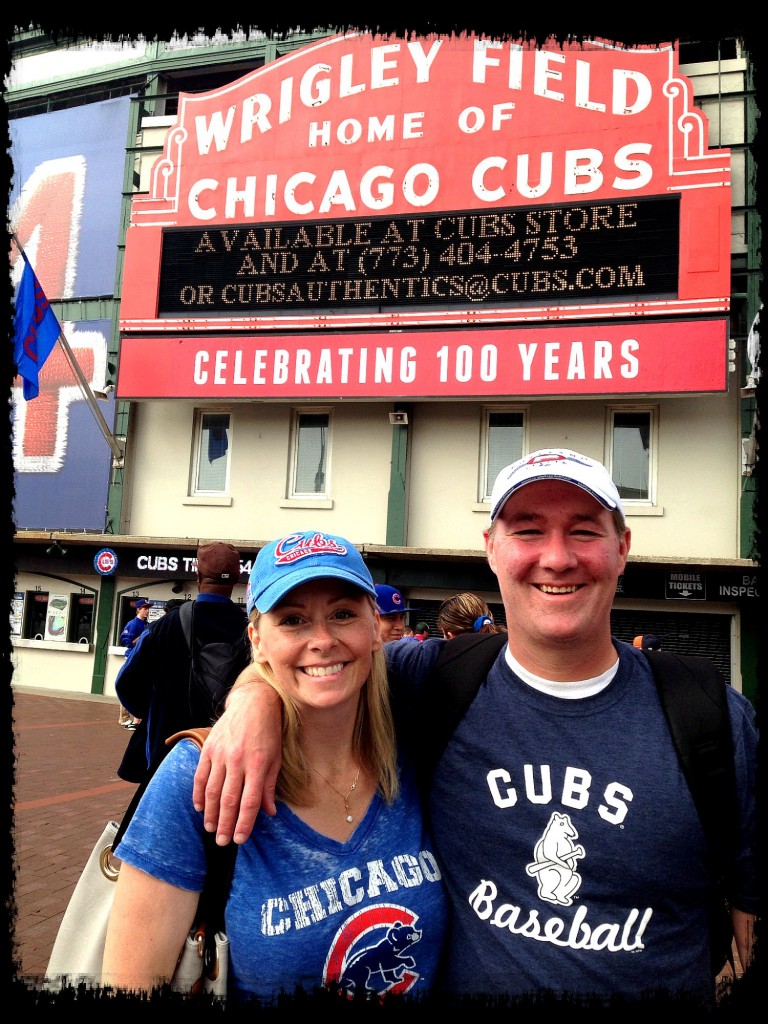 People refer to Wrigley Field as The Friendly Confines.   They could not be more correct. A wise woman I picked up along the way to watch the game with me and enjoy the experience told me, “This is not just a date…..it is a date with history and baseball.”  Indeed.