A couple of weeks ago, our family celebrated our reunion.  This is not a blog to bore everyone about a family no one really gives a crap about, other than us, of course. Rather, it is an educational piece which can be used by those who don’t properly know how to celebrate a reunion…..especially on the 4th of July, and if you have twelve brothers and sisters, their wives, husbands, children, grandchildren, uncles, aunts………yada yada you get the picture. Here’s the honest picture which bleeds 1000 words, but only one fist. 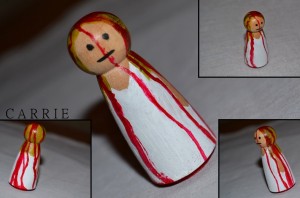 As a rule of thumb, or in this case, “fist”, the first way to make a grand entrance to your family reunion is to punch your nineteen year old niece in the nose, thus making blood and tears flow.  Reunions are much like writing; your introduction must develop interest in the remainder of the story or weekend.  We also call it a hook.  This was more of a left hook.  Before my readers hate me, I shall explain properly why it was completely accidental.

Located on a beautiful plot of land in Big Ape Country (Montana) upon arrival, I anxiously awaited siblings throwing out a red carpet or just welcoming us to their home.  Initially, I was welcomed by two of many rambunctious nephews, one about three years of age and the other six, urging me to watch them display their boxing skills on a backyard heavy bag.  Happily, I complied.  Pounding their tiny little fists into that bag made me remember our brotherhood rumbles in our basement.  Pure nostalgia.  I couldn’t help but ask them if I could hit the bag myself.

Tossing a few weak punches just to make them giggle, I decided to show them my left hook.  Now little did I know, one of my nieces was hiding, much like camouflage, behind the black and yellow punching bag.  My left hook hit the bag which then swiftly cracked my niece in the nose. This happened ten minutes after my arrival.  Some people thought that was pretty good for me to go that long before making a girl cry.  Most people had bet it to be no longer than five.

Much like a Stephen King “Carrie” moment, her nose bursted out with blood.  It was everywhere according to my wife while consoling her.  Honestly, I wanted to cry.  Evidently, the blood was like a red deluge flooding her face, shirt and shorts.  This was not one of my crowning moments. When my brother, Tom, arrived to hear the story, compassionate soul he is, could only shrug his shoulders and ask, “Did anyone get a picture?” 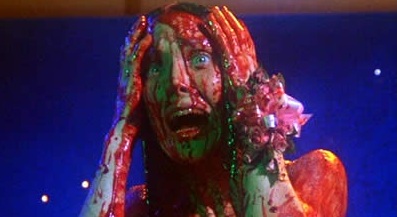 Uncle Ben did this to me … accidentally.

The accidental incident made me realize a couple of things though.  One, I’m a klutzy fool, and two, unless I’m fighting a five foot tall girl, I should stay out of the ring.

My niece, Josie, and I made amends shorty after she showered off the blood and changed her clothes.  She was a real trooper about it……..mostly, it just scared her mother, and everyone else at the reunion, thinking she was bleeding out of her eye sockets and surely the victim of some kind of 3rd of July terrorist attack.  Therefore, I thought since all was forgiven, and my introduction completed, I’d move on to the body of the reunion.  This body came in three forms: a tent, explosives, and a rib.

(Let me preface the following by writing that my wife, Brittney, is completely, utterly and enthusiastically responsible for the following)

On my bother’s property, many people were pitching tents because he and his wife, Molly, didn’t have room for one hundred people infecting their home. It was nice to recognize so many families enjoying this little camping trip reunion, except for one particular, unique group. Witnessing from afar, three morons just slightly smarter than me, unsuccessfully attempting to erect a thirteen by ten foot tent seemed as though I should provide some immediate assistance given they’d been at it for 45 minutes.  These three clowns were fumbling and fighting with this tent like three female beavers bickering about how to construct a dam.  It just didn’t seem to be working.  Their attempts to erect the tent were much like a ninety year old trying to get an erection.  Hopeless.  Now, let’s keep this straight, I’m not a mechanical person, but if I can lend a hand, even if it is to hold a pole, well, I’ll be there for you.

This is where my wife, BRITTNEY, enters the equation.  I looked at her and said, “As funny as this is, perhaps we should help them.”  She peered at me and said, “I think I have a better idea.”  My reply:  “yeah?”  Brittney looked at me as though I needed to save her from some ferocious Montana Grizzly and said, “Why don’t you go mow down what they have left of that tent?”

I don’t take her dares lightly.  Dropping my beverage, I sprinted about thirty yards and dove through that tent like I had to jump out of a burning building.  No one was injured, there was no blood, but the tent went down like the Titanic.  It collapsed just like we had planned.  The plan took five seconds to devise, but we took it down in one.  Luckily, the three stooges thought it was funny, and Britt and I helped them to resurrect the nylon Taj Mahal.  In retrospect, I really do believe she saw that the implosion of that outdoor abode as necessary for its reconstruction.  It worked, much like fireworks.  They look scary at first, but the results, unless they fly at your face, are magical.

You just can’t celebrate the 4th of July without fireworks and the solid possibility of someone’s face being severely burned.  I’m the type of guy whose idea of fireworks are those little black snakes which can only cause damage to concrete, unless they grow like ivy and envelop your once green yard with a long black snake devil. (you have to be careful which Indian Reservation you choose)  That to me is a firework.  You light them on fire, and they always work.  Explosives, heavy artillery and mortars are a different story.  They  are fantastically majestic unless approaching your face with terrific velocity.  These are the forms of fireworks some of my pyrotechnic nephews, as well as our hosting brother provided for the reunion finale………about five thousand dollars worth.  They put on a display I will never forget, but although the detonations were breathtaking, you were ready to duck or dive at any moment.  I knew someone had to go down like a courageous soldier putting his life down for the men and women who have fought for the USA.  We were not disappointed.  My brother in-law, Denny, turned out to be the brave soul, or unlucky soul, sacrificing his face for mine.  None of us saw much at first…….it happened far too quickly.  We did though, hear two sounds, the wizzzzz of something which sounded as though it may be coming in everyones’ general direction.  Then, distinctly, we heard, “I’M HIT!”.  Right in the face, our brother, Denny was hit.  Trying to hide our laughter, we made sure he was ok, and luckily, he was wearing glasses or firework proof goggles to deflect this bottle rocket.  He only received a minor burn which will last forever.

We stuck around for the grand finale and it was, indeed, fantastic……..mostly because there were no casualties.  I think Denny excused himself to the port-a-potty upon orders of the MASH Unit which was on hand.

The fireworks really didn’t scare me much.  However, one of my sisters did.  All of my sisters scare me, but this incident over a BBQ rib really terrified me.  At a reunion, along with five thousand dollars worth of fireworks comes five thousand dollars worth of food, thus resulting in five thousand hours of cleaning in the kitchen.  We all chipped in with the cooking and the cleaning, but my timing was a bit askew while looking for a leftover rib in the kitchen.  I didn’t know she had skipped most of the fireworks to clean a very large kitchen.  This rib caused a rift.  She bursted open fire on me like I was on enemy territory.  “If you think you’re going to eat another rib, you had better clean up after yourself!”  I was just going to eat a rib and throw the remains out onto Greg and Molly, our hosts’ yard after angrily devouring it.  But, the look on her face made me think, I should just get the hell out of here.  We later laughed and all was well…….I hope.

Concluding a reunion can be tough.  This one really wasn’t.  There was blood, buffoons, burns, ammo and lots of ribs….I feel like we had it all.  (I’m just sad I was too much of a coward to eat one of those ribs).  I also have to say, there was a whole lot of love at Greg and Molly’s place.  It was fantastic.  There are even memories and scars to prove it.

That was a pretty weak conclusion.  The introduction and conclusion should be the best and it’s always the toughest.  That would be our mother.  Even while shaking her head, she was there from the beginning, and she lasted up to the end.