For those of you who don’t care for baseball and find it extraordinarily boring, you missed history last night.  I even missed some of it.  Everyone knows of players such as Babe Ruth, Jackie Robinson, Hank Aaron, Mickey Mantle, and Roger Maris, but we only see them in museums, or read books from the past or perhaps just hear old stories from a father who loves the game.  Last night, I witnessed a part of history (fun history) I will be capable of telling a son or a grandchild about. It was an evening I wish I could have shared with my late father.

There is no possible way to go into details regarding everything that occurred last night.  I can only say that when seeing marvelous athletes compete and win, my wife and I looked at each other and collectively said, “Do you have goosebumps?”  Yes.  And it’s not necessarily because of  the team you’re rooting for, it’s sometimes the fans.  These teams and fans come together as a team and a family.  I’m not limiting this to baseball.  It can be soccer, football, hockey…..I don’t really care.  What I do care about is seeing people in a stadium hugging someone next to them who they don’t even know. 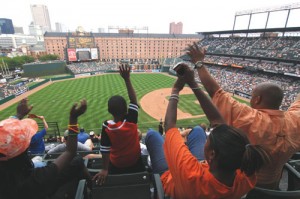 It gives people a chance to forget. With our economy, there are millions of people who are struggling not only financially, but emotionally.  But if you can forget for a day or even a moment about your stresses, those goosebumps make you laugh, smile and even provide tears of joy.  It was good to see so many people happy.

Regardless of the sport, many people will root for the underdog.  Last night, the underdogs (plural) won.  There was a perfect storm in baseball.  The Yankees lost to the Tampa Bay Rays, thus allowing the Rays in the playoffs.  At one point, The Yankees were up seven to zero in the eighth inning, but somehow, the baseball Gods prevailed and allowed the Rays to come back from this deficit and win in the bottom of the 12th inning on a walk off home run.  The fans blew up with fabulous emotion. The Red Sox lost to the last place Baltimore Orioles, thus eliminating the Sox from the playoffs.  The Atlanta Braves lost a crushing defeat to the Philadelphia Phillies, allowing the St. Louis Cardinals to knock the Braves out of the pennant race and give the Cards, who were at one point, 10 games out of the race to now have a chance to win the coveted World Series.  (This may be a bit confusing for those of you who don’t watch baseball).  I’m even confusing myself.  Ultimately, and most importantly, all of those games being played at roughly the same time, ended in spectacular dramatic and historic fashion within the course of 25 minutes.  We didn’t have enough television sets to watch them all.  Baseball historians have recognized these feats as having never occurred over the course of a century. 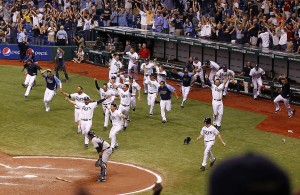 This may sound a bit corny, and off topic, but there is a song by The Doobie Brothers titled, “Listen to the Music”.  I’ve never been around a person who couldn’t laugh, smile or sing along to this happy tune.  Last night, we were listening to the music.

Baseball, while sometimes boring, can bring strangers together, whether you know the game or not, in a very positive  way.  And, it can be magical.