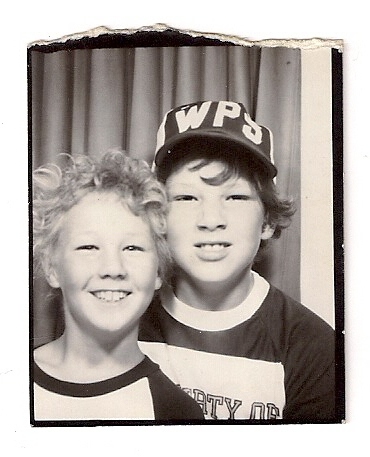 This story is not about a picture of two young ganstas deciding to, idiotically, take a photo in a coin operated photo booth.  Rather, it is about a hat and an ice cream man who created the hat.  The WPS displayed on my brother Tom’s hat represented Waste Paper Service, a youth baseball team Tom was playing for and the business we were representing.   I was merely the bat boy for two reasons: one, I was too young to legally play on the team, and two, that name (Waste Paper Service) was just far too embarrassing. We were the Bad News Bears of Spokane, Washington.

Our coach and local Ice Cream Man, Walt Mabe, a Vietnam Veteran, had a passion for baseball and a further passion for arguing with umpires.  Having  utmost respect for any veteran, Coach Mabe was no exception.  This brave man had his left leg removed after stepping on a land mine while fighting in Vietnam.  However, he maintained some idiosyncrasies which must be acknowledged.  First of which being that his ice cream truck was the only one which didn’t play the traditional jingle, “The Entertainer”…he would play “Ride (Flight) of the Valkyries” from “Apocalypse Now”.  Additionally, the baseball games we played would usually last upwards of 17 or 18 hours because he kept a rule book handy in his wooden leg which he would pull out on an inning by inning basis.  As a Catholic, it would create an image of a baseball priest providing a homily after each strike or ball.  Those poor umpires, making about 4 cents an hour with coach Mabe’s rants, are now, hopefully, and deservedly in some sort of baseball heaven.

I’m sure my brothers Tom and Greg will provide additional commentary on Walt’s quirks.  Yet, I will quickly present the most memorable one.  While taking infield practice, (for those of you who despise or know nothing about baseball, this is when the coach hits ground balls and fly balls to the players prior to the first pitch of the game), rather than using a bat, and I kid you negative, coach Mabe would use his wooden leg.  Going to the ballpark was always genuinely interesting being coached by this good man. Bless his baseball soul and his wooden leg.

Just a typical Spokane little league experience.  You play for a team sponsored by and named after toilet paper, coached by a man with a wooden leg who uses it as a bat, and the games would last 16 or 17 hours.  Yet, I still love the game of baseball.

(All is true with exception of the ice cream truck jingles.)