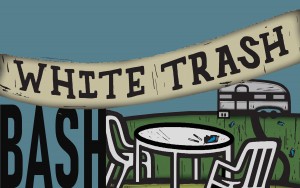 Celebrating the 2020 new year was nothing like it was in 1979.  No eggnog.  No fireworks. No spiked punch…..punch spiked with seven up and Kool Aid, aided by my crazy mother.  We also don’t have metal trash cans any longer.

My wife, who works for a union I will not name, won’t allow non unionized beverages in our house. (She drives a truck for a certain beer company sponsored by a guy buried in our backyard, or perhaps some stadium in New York.)

Back in 1979, knocked up on eggnog and Seven Up, the locals and I would walk outside and bash galvanized trash can lids against other neighborhood trash can lids.  At the stroke of midnight, this is how we’d ring in the new year. It was loud, so that was cool for us, but not for the slumbering neighbors.  We explained to our neighbors, the next day, that we didn’t have enough money for fireworks.

After telling my friend this story, she officially declared our family White Trash.