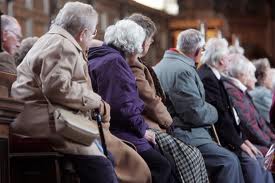 Fact: Ninety percent of the congregation is only praying for their team on this holy day.

Fact: Much of the congregation arrives thirty minutes early for tailgating.

Fact: Tailgating Christians are eighty percent more likely to attend church if port-a -potties are available within the place of worship.

Fact: Those attending mass possessing front pew tickets, after receiving the blood or body of Christ (communion), arrive to their home twenty minutes earlier than the other parishioners, given that these seats ensure a speedier exit.  They are the first to receive it, and the last to think about what it actually means.

Fact: This is one of the reasons the NFL televises the game at 6:30pm eastern time.  Everyone is drunk and tired, but still willing to watch the game.