Sarcasm is a wonderful weapon when it’s used properly upon others.  When it’s tossed back at you with wicked power, it can be equally effective.

I write so I can help pay the rent.  If I wrote to make a ton of money, I don’t think I’d see, hear, or have any contact with earthlings I enjoy……i.e…..relatives, friends, and even an occasionally friendly neighbor.

Britt (AKA…Yoko Gannon) and I recently moved to a new neighborhood, thus befriending and defriending members of the community.  Sir John Ellingson and his wife have welcomed my wife, Britt, and I into this humble neighborhood.  His wife, Megan, and their daughter, Emma (AKA…Peanut) have also made us feel welcome.  They bake us magnificent banana bread, prepare terrific omelets and invite us to their daughter’s dance and ballet classes.  Genuinely, and without any sarcastic tone, they are great people.  John actually irritates me because he is taller, maintains more hair, stays in shape, has a good job, is a great father and is just generally better than me.  He also has a sense of humor and sense of dry wit, making mine sound infantile.

Britt, Megan, John, Emma, Chris, (John’s friend) and I had some appetizers the other night at their house.  John was a bit irritated with me because I don’t update my blog enough.  I tried to explain why my updates aren’t always up to date.  My editor always wishes to read my blogs before sending them to the world.

John is a man who knows I stay at home attempting to write.  He also knows there are times when I just get to take the dogs to the park and prepare dinner for Britter Bear Gannon. One recent day, while suffering from writer’s blockage, I purchased two pumpkins so I could surprise Britt with my carving talents.  Britt happily and proudly described my artistic prowess with the pumpkins to John.  In a needle like fashion, John responded, much like the mayor of West Seattle,….”so Ben just sits at home and carves pumpkins all day”?

John, my new, and perhaps ex friend, works long hours. I wave him goodbye when he leaves for work.   Other than making fun of baseball teams I root for, he supports my writing and motivates me to be a good husband, and eventually and hopefully, some day, a good father.  There will never be another “Peanut”, but maybe someday, Britt and I will have a Cashew.

I shall now provide a picture displaying the 8 working hours, or 8 seconds it took to create these Halloween monuments.  Easter Island, The Pyramids of Egypt, The Sphincter, all close seconds to my master pieces.  These may be the eighth and ninth wonders of the world.  How many wonders of the world exist?  Sorry.  I don’t trust Wikipedia. 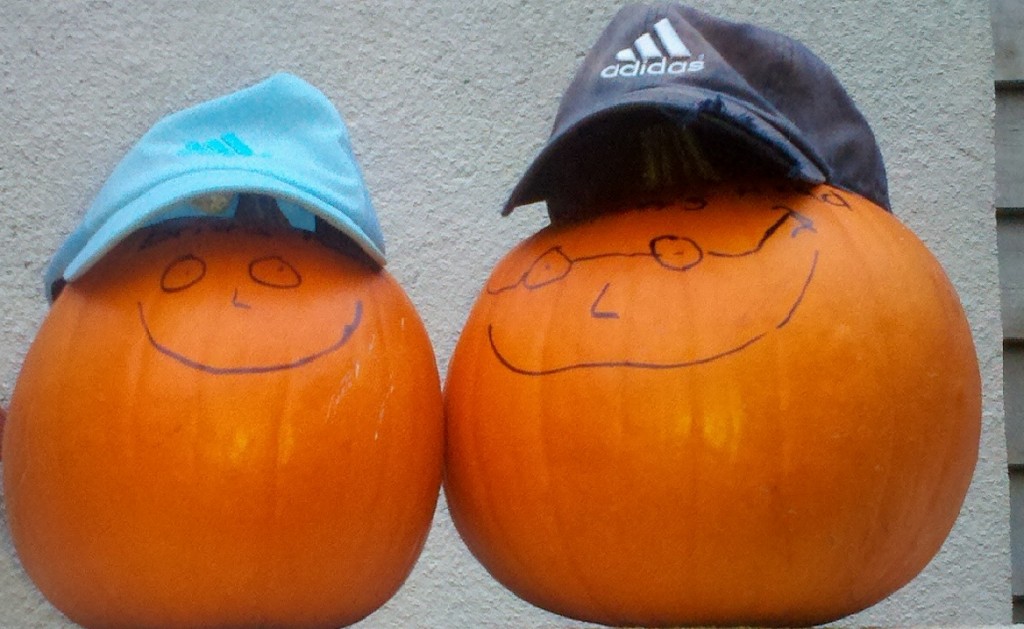