There are billions of people who were wishing to win Warren Buffet’s Billion Dollar Buffet he offered to anyone who could  fill out a perfect March Madness college basketball bracket.  There were also billions of people entering their office pools for a mere five dollars to win a whopping twenty dollars. Sadly, the tournament is over and billions didn’t win their billion, and office gamblers lost their five bucks.  Either way, win or lose, it’s fun even if you have to carry around a six pack of remote controls like an old white haired lady carrying her bingo blotters in her holster.  Men carry six remotes because five of them may vanish or appear shattered on their hardwood floor when the inevitable upsets begin to destroy your bracket.  Usually, this happens when your wife is gone shopping during one of the 32 games being played in the 64 team tournament.  Upon your wife’s arrival, when she tries to watch Real Housewives of NYC, she witnesses the rubble of one remote but is amazed we can’t find the other five.  In a large house, things do commonly vanish and you are both perplexed and mystified when you can’t find them.  These items could include a cell phone, car keys, a hat or a painting created by your lovely wife.  I guess you could also refer to them as misplaced.

The five missing remotes are a different conundrum because it makes the husband feel shame.  The husband must watch his wife look under every couch cushion, pillow and throw pillow (equalling close to 100) and can’t help but assist in this futile hunt for the almighty remote.  She then checks the refrigerator, the pantry and silverware drawer just to make certain said husband hasn’t made some silly mistake while carrying the remote to those places 13 feet from the T.V. room.  The husband apologizes and the compassionate wife excuses him by saying these things happen.  The shattered remote on the floor does not appear to have merely been dropped but rather spiked with such tremendous force, even an airplane’s black box couldn’t survive.  The wife shakes her head, but she knows the husband is embarrassed, which appears to be enough for her since the husband acknowledges what an idiot he is.  Fortunately, the couple keep an emergency remote in a lock box to which she is the key master to said box.  Still, the questions remain regarding the ones mysteriously vanishing into thin air, which ironically is true.  Let’s just hope the wife doesn’t go looking around in our neighbors’ back yards where the remotes may have fallen from the sky. 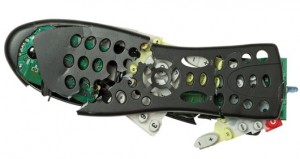