My mother has had many nicknames over the past eighty some years.  Most have pertained to her eyesight and hearing issues, but others have regarded her technical skills, or hatred there of.  There’s Helen, or HK.  Most people would find this to be a magnificent nickname because of Helen Keller’s remarkable quest and breakthrough to communicate.  Mom only rolled her eyes when we’d refer to her as Helen.  This just after  a waitress asking her if she wanted eggs with her toast, her reply might be, “No, I don’t want legs with my host…..that’s ridiculous.”

Ma Barker, another nickname she despised, was only derived from a history book her seven sons didn’t read.  We were too busy playing baseball and football in the backyard.  When we were instructed to do homework, our idea of reading a chapter was reading the bold letters introducing the chapter.  “Did you do your home work?”

“Yeah, we read about Ma Barker.”

Little did we know upon non further review, Ma Barker was a murderer and common thief.  Our mother, quite the antithesis.  Ma Barker  had four sons who committed most of the crimes she convinced them to commit.   Since we weren’t into details, when we’d refer to her as Ma Barker, she would become uncommonly angry and say, “Do you even know anything about her?”  I think my mom’s seven sons could only assume Ma Barker was the mother of the great Bob Barker from “The Price is Right”.  Wrong.  We should have guessed that was the wrong answer when the next chapter wasn’t titled, “Son of Ma Barker”.  It was titled, “Death and Imprisonment”.

Mom received other lesser known titles such as Amelia Bedilia, Mither, Mommy Fearest or Dearest, but she is entitled to two further nicknames providing her essential identity and capturing the love which has never emptied her tank……especially when her children were running on empty.  The first being Jitterbug, and the last being Mom. 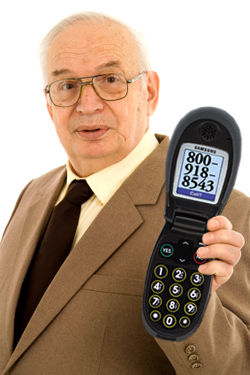 Even your mother can use the Jitterbug cell phone.

Communicating with our mother via anything was a disaster.  Many of my sisters have sought counseling over not being capable of saying the words, “I love you”, because she, literally, or perhaps deliberately, can’t hear them over a cell phone.  My mom is pretty sharp so literal and deliberate take on different connotations regarding her prowess.  Many of my siblings gave up.  When “I love you so much”, comes out like, “I’ll shove you so much,” it becomes verbally taxing.  Then along came Jitterbug.  The answer to all our communication prayers.  Lord knows we wouldn’t take the time to write this glorious woman a letter.  That’s Blasphemy in today’s tech world!

Like an 8″ by 12″ picture frame, my mom can hang this Jitterbug cell phone on the wall and clearly see each number while pressing the keys with the palm of her hand.  It’s cutting edge technology.  And, much like my mother, it’s cool.

When I call my mother on the Jitterbug, I use her most mysterious nickname……Mom.  She’s earned that one.