My father began this story, a couple of my brothers interrupted, and, beautifully, my father finished it.

“There’s no crying in baseball.” Sadly, for me, there was crying in baseball; I just had to do it in my bedroom.   Additionally embarrassing, as a youngster, I wore a plastic blue helmet to bed representing my favorite team, the Los Angeles Dodgers, a team currently facing extinction in the 2013 playoffs. 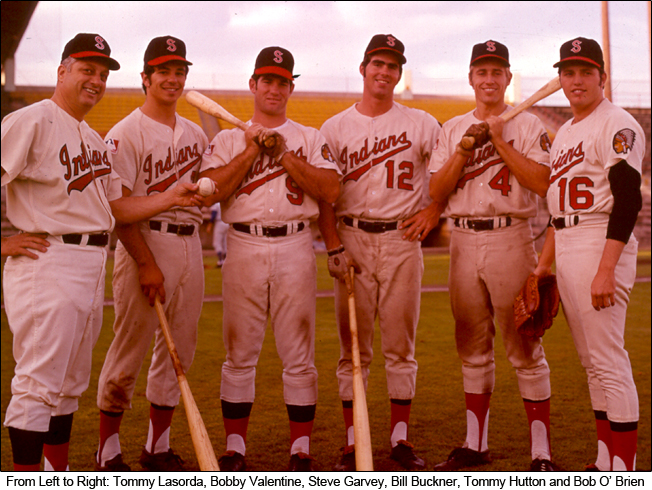 1970 Spokane Indians (Triple A team for the Dodgers)

Growing up in my hometown far far away from the city of Los Angeles, California, I lived and cried for the Los Angeles Dodgers.  My father simply described Dodger history; The Brooklyn Dodgers packed their bags one day and flew to L.A….by way of Spokane, Washington.  Dad spoke of the ball players gracing our city in the minors, for only a moment, and he told me I should pay attention to when they made it to the Major Leagues, because it would be something special.  It was. Baseball was and still remains my favorite sport.

My brothers liked baseball, but they didn’t love it like me.  That presented a problem when the Dodgers were in town on our television set, minus a remote control.  I was always hoping the bottom of the ninth inning would arrive before they did.  Sometimes, that didn’t always happen.

In the bottom of the ninth inning, with the Dodgers winning a meaningless game (to some) by three runs, the Braves had the bases loaded with two outs.  As usual, clutching a bat during a ballgame, I thought the Dodgers had it won.  That’s exactly the moment my brothers entered the game.  Just like extraordinary relief pitchers, they ruined my day.  Sweaty from football practice, they walked into the living room wanting to change the channel while I was squeezing my bat and wearing my plastic helmet.  Manually, they turned the channel to some popular cinema classic such as “Creature Feature”.     Enraged, that’s when I turned Dodger Blue and was fortunate enough to be carrying a Louisville Slugger.  Using my bat, I changed the channel back.  The channel by channel slugfest began.  Almost precisely at that moment, I watched a man playing for the Atlanta Braves hit a Grand Slam against my Dodgers to win the game.  My brothers couldn’t have been more pleased, and I couldn’t have been more pissed.  Turning the channel to anything, such as the news, my two brothers, laughing, turned the channel back to the ballgame.  Even with a bat, I was overmatched.  They were excited about the grand slam, and I didn’t wish to see all the replays.  Retreating to my bedroom, I remember wailing about this silly game which seemingly meant nothing to anyone but me.

Soon, my father would be arriving…….just on time.  He entered the house after working for many hours and could smell mom’s cooking, hear me crying, and sense my brothers and baseball had something to do with this mess.  With a discerning look on my father’s face, he simply asked, “What’s going on?”

Snickering, my brothers responded with a less than convincing response, “Nothing.”

Dad, not convinced by their response, asked, “Nothing, huh?  Then, why is Ben crying?”

My brothers, Tom and Greg, could not mask their grins.

Knowing me well, my dad inquired, hoping to avoid further controversy, “Did the Dodgers lose today”?

I could hear their response, even from my bedroom with tears streaming from my face, “Yes.”

That’s the point where your dad eases your suffering.  Walking into my room, I didn’t allow him to ask any questions.  I formidably screamed, “IT’S NOT ABOUT THE DODGERS!”  He responded with such compassion and convincing fashion to an eight or maybe nine year old child.  “I know it’s not about the Dodgers…..are you ok?”  Wiping away tears, I could only respond with a simple, “Yeah.”

Looking back, I was expecting my father to give me a lecture about it just being a game.  He didn’t.  He knew it was more than a game to me.  For some reason, the way he put out the fire made me feel safe from the embarrassment I was anticipating at the dinner table that evening.

I still like the Dodgers, but I don’t cry about games anymore.  I just throw remote controls and listen to my wife’s profanity.  And, now I can admit, it was about the Dodgers.