On a very slow day of meaningless college football games last weekend, when weeds outside were calling to be whacked, I had to find some justifiable way of remaining on the couch.  A call from a friend made it all possible.  He inspired me to write a very poetic blog. 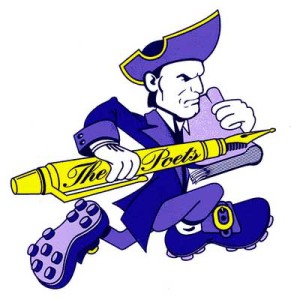 The Whitworth Pillaging Pirates from Spokane, Wa, were traveling to play against the Whittier Poets of “somewhere” in California.  It’s appropriate the “Poets” don’t really have a proper place of residence.  It’s simply, “somewhere in California”.  Lost souls.

Instinctually, I began thinking of Notre Dame and the Fighting Irish, or the Ragin Cajuns from the University of Louisiana, Lafayette.  These are somewhat intimidating, if not menacing mascots.  Hell, even the Stanford Tree makes the Poets sound withered with fear and desperation.  So, I couldn’t help but imagine how CBS’s own Brent Musburger would announce their presence on the grid iron.

“And here they are, the Rambling and Blathering Poets of Whittier.”

“Make no mistake, these are the darkest Poets you will ever see on turf.”

“Just about to exit the locker room and enter the modern day gladiator stage will be California’s own, ‘what the f–k is a Haiku?’  Whittier Poets!”

Pre-game prep, also referred to as, “The Emily Dickenson Stretch” requires players to stay, completely secluded, in an attic for days before the game, studying game film, writing sonnets and pondering the difference amongst heaven, hell, purgatory and the possibility of half time.  During the game, defenses facing the Poetic offensive diatribe succumb to abject confusion and dilated eyes.  The only caveat is whichever team wins, they won’t know it until they are dead.  That defines the life and death of a poet.

So, smoke it up, you bards of Somewhere, California.  You will never know if you win a National Title, but you will successfully depress people throughout the nation merely by wearing a weird helmet and dimming the stadium lights.