Prisoners don’t sell Lemon Aid when they’re in jail.  They sell Kool Aid.  Lemon Aid will get you shanked or severely beaten.  Kool Aid will keep you on the safe side of the woods…..no matter what type of flavor it is.

While roaming the streets the other day, I stopped by an estate sale.  Not interested in purchasing anything, I thought I may find something to buy so I could justify using the inhabitant’s bathroom.  That’s when I stumbled across this picture. 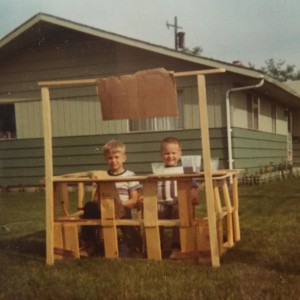 As far as I know, people don’t usually sell family pictures at their sales. Clearly, the people promoting their trinkets were also preparing for a trip to a nearby transfer station.  Oddly, this specific picture was the only thing I could imagine buying.  The people working the sale didn’t know these two ruffians, therefore had no issue with me purchasing it. Perhaps, because I didn’t know the two boys selling drinks at this stand, it made the picture seem a little like a piece of serene summer nostalgia.  It resembled more of a painting, or a portrait. Prison cell Norman Rockwell if you will.

After purchasing the picture for less than the two boys were selling their aid, I could only imagine they might be brothers. If you look closely at the well lit cardboard sign, these two young fellows below are selling Kool Aid, and they look as though they are trapped in this makeshift, wooden, and glorious chunk of lumber confinement.  It could be a four by four, or six by six space……no big deal.  One looks pleased and the other looks as if he’d prefer lighting his store on fire, just to collect his allowance insurance. By the way, in the seventies, what kid didn’t light something like a dry field on fire?  Therefore, I believe my theory regarding their pyromaniacal behavior may be spot on.

I also wondered why were they selling Kool-Aid as opposed to Lemon Aid?  I guess they were just ahead of their times.  Taking a look at the background, the atmosphere beyond their faces told the story.  I imagined they were living on a dead end street where no one, with the exception of the mailman, may consider purchasing a beverage.

I’m glad this play pen wasn’t solitary.  It looks similar to what Gilligan and the Skipper might fabricate to gain the attention of Mary Anne and Ginger.  Or, it could have been a father building this solid oak convenient store just to keep them out of their mother’s hair on the inside.

I’ll bet that house behind them was filled with loving parents.  Or, I guess that’s what I wish to imagine.  I’ll also bet those two may have been in trouble for lighting some brush on fire behind their humble house, thus being forced to sell Kool-Aid after their mother had perhaps extinguished the fire.

Looking beyond their eyes and place of business, I imagined them taking breaks after nary a patron was to stroll upon their street, unless running from the law.   I thought of  them running through the foxtails, only to return to a mother telling them to dispose of their fox tailed socks so they didn’t destroy the washing machine.

There are a few things brothers or friends do during the days before you must return to the drags of school.  You play Wiffle Ball, mow the lawn, set fires, and sell beverages only fit for a parched and sympathetic mail man.

2 thoughts on “Fox Tales (A Kool Ode to Summer)”