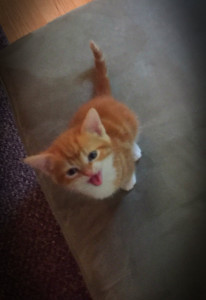 His face is as flat as a pancake, and that’s all that is flat about our new, six week young kitten, Michael Flatley Gannon.

Performing a magnificent rendition of the “River Dance” on my face for three consecutive nights, his paws and claws are stamped all over my head.  He is smaller than one of my forearms, yet commands respect while monopolizing any and all of our rooms… dancing, sleeping, drinking and eating in each one.  He also manages to decide where his wet and dry food should remain, depending on his mood.  It’s the first and official Southern Ireland Monarch of our time.  Potatoes were so much easier.

Michael also finds comfort in my wife’s locks during what should be a peaceful slumber for both of us. Her head has become a comfortable nest between the hours of ten and three in the P.M. and the A.M.  It’s the first time I’ve felt grateful for losing my hair.

“River Dance” being beneath him, he refers to himself, with extreme arrogance, as “The Lord of the Dance”.  On a good day, you may refer to him as Mr. Flatley.  When irritated at two o’clock in the morning, it must be Lord Flatley, or simply, Lord.  Sir Flatley is also a name he enjoys after some properly aged bourbon.

Our veterinarian removes his white coat and bows to him before charging us with a significant fine for taking care of a cat who clearly CAN take care of himself. “Good morning, My Lord.”  Good grief.

As I write this, and I’m frustratingly serious, he continues to pounce on all my keys, thus making this silly piece much more difficult to write.  Fortunately, he hasn’t found the “publish” button.

It has now evolved to a 2016 Looney Tunes episode with actual humans and a futuristic animal attempting to withhold me from using my computer. All the claws and scars are non-fictional.  As the former actor, Elmer Fudd,  once said, “I hate that rabbit”,  I don’t think he did.  And, as for today, I don’t hate this cat. 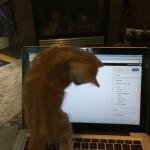 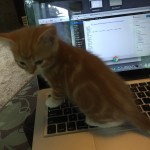 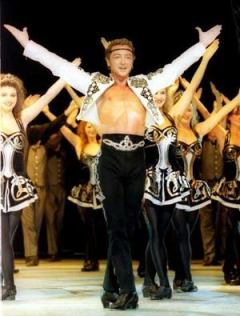