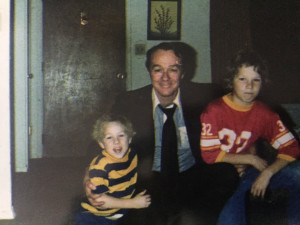 Sadly, there is no image of an enormous dog named Bolivar in this picture, yet the door behind my white head remains significant.

This picture was taken in 1979, the same year the Pittsburg Pirates won the World Series.  The door was as ugly, colorful and magnificent as the Pirates’ uniforms that year.  I remember the Pirates just as I remember our dog.

Very little did I know about Bolivar.  Evidently, he was part of a grandeur litter given as a gift to one of my brothers, Glenn.  This may have been ten years before I was born. Therefore, I only knew him in his later years.  Some say he was a Newfoundland.  When I came to know him, at my age and height, I just maintained the notion he was a friendly and cuddly black bear.  Everyone in our neighborhood felt the same making all of us feel safe.

The door represented a gift granted to us by this overweight canine maintaining justice on our block. Each night, after a hearty stew, Bolivar always wished to head out for the night and scratched on the door until someone would let him outside to patrol our neighborhood.  When Bolivar was alive, I don’t remember a crime on our street.  We didn’t lock our doors back then and even left our garage door open before Bolivar, sadly, passed away.  Our dog died, but the door didn’t.  Countless times, our mother pled for a new door.  Our father, a man crazy for nostalgia, refused to replace what was left of Bolivar.

After Bolivar died, oddly, crime became a serious issue in our neighborhood.  Locking our doors and shutting the garage door became a task each night after his death.  It didn’t seem right to a boy of my age.