Our backyard  stadium was built by love and mystery.  The love was not a mystery, but the mystery was built by my brother who existed only on paper; not in pictures.  As a ghostly like character, our brother, Aaron, happily haunted his six brothers and six sisters from time to time.

The mystery of my brother, Aaron, goes on and on, much like the furthest ball I’ve ever witnessed hit in our backyard, winding up in our front yard. Perhaps, like the house in New York that Ruth built, this was the house that Aaron left, and he did it with great style.  There were no apologies necessary, no diseases to deem him as the luckiest man on the face of the earth like Lou Gehrig; this character just ran his own way.

At that time, he was the most mysterious man on my earth, and remains to this very day.  There will be no picture of a man named, Aaron.  He only existed in the eyes of those admiring him……..and for only a brief moment, those eyes belonged to a boy tossing a ball to him before he left us. 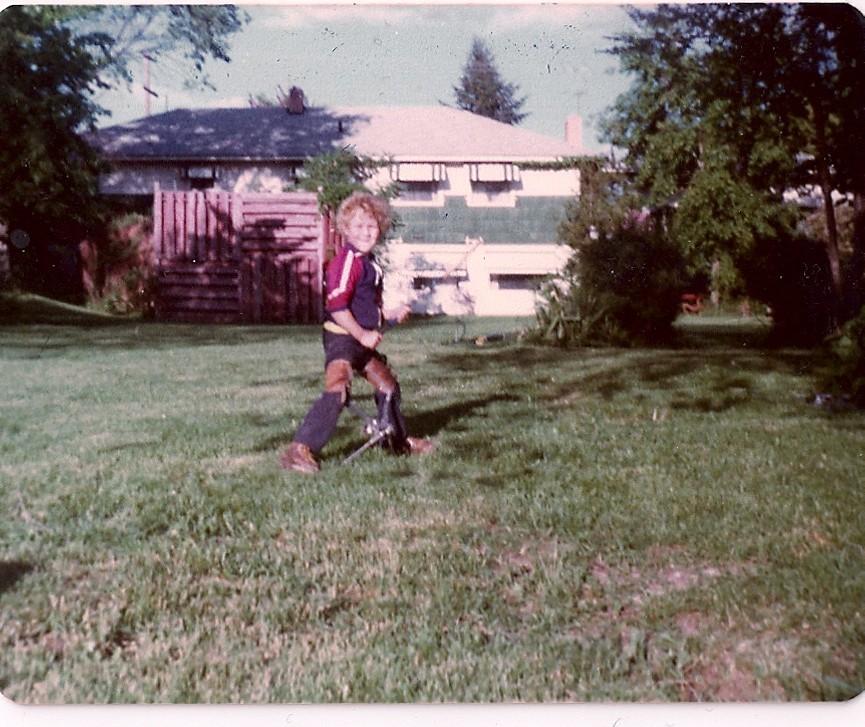 Looking at this picture, I remember a child throwing a ball to Aaron knowing where the ball would reside.  It was with bitter sweetness, because the time you spent with this ghostly and sometimes mythical character was cherished.  There is a reason you don’t see the batter in this picture, just like you can’t find one picture of a leprechaun or a unicorn.  They don’t wish to be captured.  And, they never will.

I’ll never know him as much as I always wished, but I always admired him for being, much like a novel, that chapter you can’t wait to finish reading.  Throwing to him in this brace depicted in the picture, I was tossing a baseball to my brother, knowing that when he hit it, he and the baseball would never return.

The brother I still don’t properly know, but indeed love, was the only man to hit a ball out of Gannon Stadium. To hit it out of our stadium,  it must cross over the Red Monster, (our center field fence) travel further over the house on a red ball flight, and land in our front yard located across from the house many of us occupied from time to time.  Depending on the wind, proper attitude, altitude, matched with skill, cunning, and shear talent, this was quite a feat.  But, with our brother, Aaron, his exit was far more impressive than his God given skills.  It’s difficult to decipher which one I respected more.

Not even rounding the bases, or grass and tree roots, he found the ball in the front yard,  left with the ball and we were all wondering when the ball would come back.  It never did.

Aaron was one of the two brothers out of seven to hit right handed.  I think he just did it to agitate my father. That was typical Aaron, but ever so intriguing.  Because of the great Mickey Mantle, my father taught five of his seven sons to hit left handed, even though we were born righties.  Our mom was the only lefty in the group, but she wasn’t destined for the big leagues.  Our brother Aaron, with magnificent talent, was on a mission not to make it to the big leagues.  He just wanted to have a good time and happily mess with life.

When Aaron played baseball, he was an enigma.  As a very talented player, he just showed up in time to play, or piss my dad off.  At the age of five, it was the first time I heard my father teach me the term, “lollygagger”.  He was a bored centerfielder only willing to run to a fly ball at the precise instant it was about to touch the ground.  I never witnessed him missing one of those balls, but I did witness my father going into cardiac arrest. It was then, when in high school, Aaron would laugh, ending the inning, knowing he was coming  to the plate and smash a home run.  It was also when dad would shake his head in disbelief, wondering why he deserved such torture.  Aaron would then leave the park after hitting a home run, and nobody knew where the hell he went after hitting it out of the stadium.  He never touched home plate.  Aaron just hit the ball and without properly running the bases, much to his younger brothers’ dismay, simply ran off to Montana, Utah, Idaho, or Missouri with the ball.  He was that fast.

Running into my brother, or as I’d like to characterize him as a “true character”, from time to time over so many years, it is always a gift. In my dreams, he has the same smile, and a glimmer in his eye, making you want to know what he is thinking, but, you will never know.  That is why I think of him often.

Still, to this wonderful sunny day, there are times I don’t want him to exist.  I wish for him to remain that fictional superman I remembered flying out of our yard one day.  Rather than feeling I was cheated by his lack of presence in our lives, I choose to focus on all the tremendous memories.

9 thoughts on “The Yard That Aaron Left”