Our dog, Jack, suffers from vertigo, but he doesn’t suffer from a lack of confidence.  He’s the first dog I’ve ever met who enjoys going to the Veterinarian. 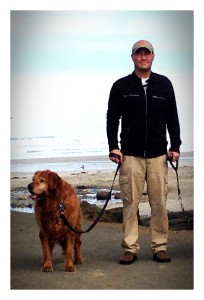 While other dogs may enter the clinic with fear, he acts as if he is a V.I.D. at the local veterinary speakeasy.  And, after twelve or so years of being an honorary member of this exclusive canine club, he is.  Strutting through the doors sporting a furry reddish golden retriever blazer and unnecessary leash, Jack is greeted by two employees, one taking his leash with honor, and the other respectfully petting him.  Receptionists blush as he saunters with dignity to the scale, not requiring the usual request necessary for other dogs.  Proud of his 120 pound frame, he turns to the nearest nurse, winks, and says, “Who loves ya, Baby?”

They don’t ask my wife and I if he can have a treat before seeing the doctor.  They know his order.  It’s a dry bone, solid, not broken.  Rather than ravenously devouring the bone, he carries it around as if it was the finest of cigars.  Usually too proud to drool, he will only do so upon request, but the drool must land in a cup with his name on it and kept in a refrigerated box for posterity.

Despite Jack’s bravado, we still have reservations when he moves so easily behind the closed doors with only the doctors and nurses.  At the age of fourteen, we know his time is limited, regardless of how unique he is.  Yet, he always turns to us before entering the “patients only den” and reassures us with a sniff in the air, knowing our smell remains only feet away.  Never letting us down, he always returns with the same swagger he walked in with, and is showered with hugs and kisses from those who don’t wish him to leave the premises.

Recently, our Jack had a bout of “vertigo” and it was our first time witnessing it.  When he collapsed on that Sunday, we thought the worse: heart attack, stroke, seizure?  Never seeing him in such a desperate need of attention, we weren’t frightened, but concerned this day may be his last.  Knowing he was still alive, frozen with uncertainty and panting as though each breath could be his last, my wife and I carried this one hundred and twenty pound gallon of fuzzy love down a rather large flight of stairs and placed him in the back of our car hoping to reach the hospital before his demise.  We made it, and so did Jack.

After Jack was diagnosed, several hours passed, and he was eventually released to us.  Upon being released, these people, from a hospital foreign to Jack, having never met him before this day, had a very difficult time saying goodbye.  With a few canine cocktails in his system, he seemed happy to see us, but as a true gentleman, or gentle dog, looked at those in the hospital who comforted him in his time of trouble, tipped his hairy hat and wagged goodbye.  Perhaps, he is just the most affable dog in the world. 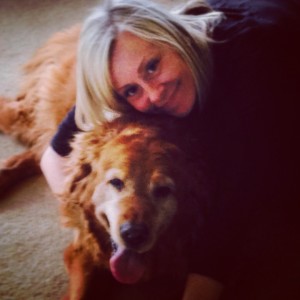