I’ve always wanted to be a super hero.  Who doesn’t?  If we could assist distressed and endangered women, men, children and impatient travelers, what could be better? Unfortunately, with my lack of super powers such as the capacity to fly, invisibility, inhuman strength, good looks, underwater communication with sea creatures, not to mention the lack of funds to purchase cool cars and shark repellent, I have become a super zero.  I don’t even have it in me to buy pepper spray.  This brings me to the sad transitional point.  Pepper spray doesn’t necessarily make you a Super Hero.

Recently, and I am serious, there has been an odd trend of “Real Life Super Heroes” floating around the country.  It has become an enigma only I have time to ponder.  Specifically, according to the papers, Seattle based,  these are ordinary people roaming certain jurisdictions attempting to keep the peace.  They fabricate costumes, such as masks, fake abs, capes, and most importantly, their special unique power which apparently no earthly being possesses, pepper spray.  THIS IS NOT A SUPER POWER!  It works when jogging down 1st and Pike St. when someone asks you for a handout, but in a crowd of drunken sailors who just wish to partake in a friendly fight, jumping in with pepper spray is only going to get your ass kicked by the only drunken sailor avoiding the spray.  People, so I’m told, even have witnessed bears doused with this substance only to wipe it off and develop a use of the English Language saying, ” ok, it’s go time”.  Yikes. 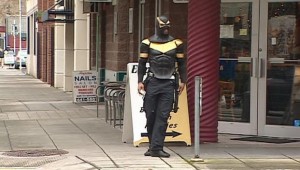 According to The Seattle Times, a man referred to in the “real life fantasy world” as “Phoenix Jones” designed a mask, suit, tie, and cape to fight crime only with pepper spray.  A Youtube video displays him sprinting in, said costume, attempting to break up a fight prompting him to pepper spray men and women before assessing the situation.   Observers and police officers noted that the men and women were merely dancing  after a fun evening of partying.  The video progresses to this masked crime fighter attempting to break up this street clearing brawl of talking and dancing only to retreat from a middle aged woman wielding a shoe while beating the hell out of him.  Luckily, for Phoenix Jones, his plastic helmet saved him from ultimate demise.  He then escaped in an SUV.

Police apprehended “Phoenix Jones” later that morning.  He was booked for assault with a “hurtful and made someone cry weapon” and was released shortly after his companion, and partner in crime fighting, “Sun City Jones”, posted bail.  His face was revealed, but I will spare him further embarrassment from posting a picture of this formerly masked crusader.  I will, however, poke a little fun of what he could have been doing at the time to save our nation with pepper spray.

Have you ever seen a man or woman take a penny out of that sacred penny jar at the inconvenient store?  Pepper spray his or her ass, including the clerk.  Have you ever been sickened by the mother of three children illegally sampling a grape at a grocery store? Don’t just pepper spray her, pepper spray the children, and just to get you in the hall of fame of justice, pepper spray all the fruits and veggies surrounding this evil mother of three, thus poisoning any others who commit such crimes.   That will be an eye and mouth opening experience for those who steal 2 ounces of produce while still in the store.  Jaywalking! Spray that Grandma until she actually knows where she is!  Where is Phoenix Jones when we need him!!!??

Honestly, I hope these real life comedians, or heroes have great intentions.  However, if you are only armed with pepper spray and good intentions, may God be with you.  You may run into some of my friends who aren’t so kind.  Let’s leave it up to the police to pop a cap in anyone’s ass.  At least they are licensed to do so.