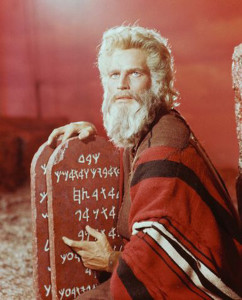 It’s one full week into the new year, and I haven’t broken one  commandment.  It’s a streak I’ve maintained for many years.  (The first week anyway.)  Most New Year’s resolutions are for the mocking birds.  I’ve found that not breaking the ten C’s isn’t that difficult.  So, each year, in a revolutionary, or cyclical pattern, I just do my best not to break any of them.  Rather than thinking about what I shall change each year, I simply review the commandments online, reflect on Charlton Heston’s over acting, and work on the one which tends to be the most problematic for me.  I blame this one on my father.

Sadly, this taking the “Lord’s name in vain” is both contagious and perhaps genetic.  Usually, I use it around the animals when they puke or crap in my office, and it’s commonly directed at my lovely wife who tries to adopt, save or purchase every animal in the Pacific Northwest. Sometimes, it flies out of my mouth as easily as saying please and thank you at the grocery store, or as smoothly as Charlton Heston can utter the phrase, “Of course you can buy a gun, young man.  Just don’t use it to murder humans.  You would then be breaking one of the most sacred of commandments.  Now, get your dirty hands off me, you damn dirty teenager!”