For those of you who live your lives for Monday Night Football, this should be your singing anthem for this evening’s mess between the Seattle Seahawks and the St. Louis Rams.

If Hank Williams Jr. hadn’t been removed from singing the Monday Night jingle, it may have begun like this.

ARE YOU READY FOR SOME SHITBALL?!!!!……  A Monday night snoozer!  This is Fired Randall Hank….. How do I get myself started (again)? 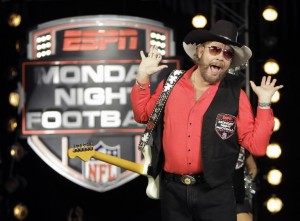 Ok, to educate those who don’t care about football or Hank Williams Jr., I will do my best to inform you that, although a wonderful entertainer, he is a notorious ass-face.  I’m not poking fun at his face, it’s just one of my terms for referring to one as an asshole.  He used to sing the Monday Night Football Party Anthem each Monday before, in another drunken page of his life, deciding to talk about politics on National T.V., as well as flirt with the female interviewing him.  Let this be noted.  I’m not throwing Hank under the Cross Country Bus, and I refuse to spit Beachnut in that dude’s eye.  I listened to and loved his music for years. However, no one in America, other than some southern fools, really care about his political stance. Hank, stick to music.  You’re good at it.  Stick to drinking.  You’re exceptional at it.  Politics, stay away unless you wish to be parodied on Saturday Night Live.

I know this is old news to many regarding the firing of Hank Williams Junior High. But, I thought since the Seattle Seahawks are playing the other High School team known as the St. Louis Rams tonight, perhaps ESPN, or whomever is broadcasting the show should bring back another less than exciting celebrity.  For Pacific Northwest Fans, it will again be a SEA of mediocrity.

Sadly, and embarrassingly, my brother, Tom, our friend, Mike, and his then spectacular wife attended a Hank Williams concert at a venue known as Unplayfair.  It was a horse race track in our hometown of Spokane, Washington.  After purchasing concert tickets and multiple Hank Jr. musical tapes for several years (I didn’t know what a CD was at that time), we were all excited to witness one of the country western singing greats.

No strangers to booze, we all partook in some adult beverages before the concert. So did Hank.  We were told by music authorities he may be a little tardy for the concert.  There was no opening act, and we ran out of money for libations.  Therefore, we were a bit agitated.  Two hours later, with bellies full of beer and empty wallets, Hank arrived.  He didn’t have a shirt on, and the hair on his chest did not outnumber the shots he had taken before arriving.  He played songs we either had not heard of, or were simply stolen from whatever band wrote “Sweet Home Alabama”.  I don’t remember much, other than a fight breaking out amongst fans who were clearly drunk and disoriented, and a guitar solo lasting  longer than the lifespan of a redneck wood tree.  I would have preferred watching that tree grow.

Enjoy the game tonight, or get to cooking dinner and talking to someone special.  Or, burn a Hank Jr. CD.  You can interpret that anyway you wish.