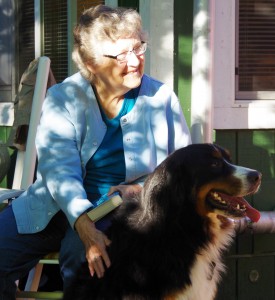 Smiling with Etta, the only Grandchild I’ve produced for her.

My mother is old.  Just ask her; she’s ok with it.  Don’t ask her how old she is; just ask, “Are you old?”  She will respond with a simple, “Yes.” Although she doesn’t act it, I would guess she is somewhere between ninety to one hundred and three.  My range of age theory is only supported by the fact that I know I was born when she was somewhere between the age of forty five and fifty three.  Despite her diminished hearing, poor eyesight, lack of mobility, inability to drive a car and rigid eating schedule, you wouldn’t say she was a day over eighty.   What keeps her alive and snoring?  It’s simple.  She has a terrific sense of humor.  Someone will read this drivel to her and she will chuckle, charge up her hearing aid battery, and call me.  Her call won’t be to reprimand me for making light of her age, but rather to invite me over to my sister’s house (currently my mother’s squatting residence),  so we can laugh together while she provides a misinformed yet detailed update regarding what her other twelve children are up to these days.

Quite recently, I visited my mother, and I left my fossilized quips in the freezer at home.  Thankfully, I knew my sister, Anne, could fill in the gaps when nonagenarian and centenarian jests may apply.  (They only live about forty minutes to four hours away, depending on Seattle traffic, so it’s quite convenient.) We had a wonderful day, and I was prepared for receding hairline observations, and comments that I may be sponsored by Old Navy and Target given my attire.  However, my mother preferred to say kind things such as, “My, you look nice” and  “Your hair seems to be getting darker.”  (I guess that’s not a compliment, but at least the adjective wasn’t thinner.) She even made a remark about my height.  “You look tall…….how tall are you?”  I told her I was six foot two.  Of course, my sister quickly snorted laughter at my response, and I corrected my height to six two and a half, creating more sisterly laughter.  (I’m only five foot nine, but many doctors would say five foot eight and a half.)  I finally let her know that I was stretching the truth regarding my height and that it is my attitude which makes me look tall.  More laughter from my sister, whose age I won’t disclose.  (She fights fire with hand grenades.)   As always, when mom chooses to hear, she and I converse with smiles on our faces and I thoroughly enjoy her company.  Hopefully, the feeling is mutual.

Before leaving, I informed my mother she had to wait four full days until the World Series would begin. I wandered into the kitchen, allowing her time to ponder what television show could supplement baseball.   Turning around to ask her if  the “Dancing With the Stars” season had ended, I noticed her chin was collapsed upon her chest, her eyes closed and her glasses had fallen to the floor.  Looking to my brother in-law, Minh, who was cooking in the kitchen, I asked, “Hey Minh, is she dead?”  With a deadpan look on his face, Minh replied, “Oh yeah; she does that two or three times a day.”  Anne and I awakened mom with our laughter, and mother quickly asked, “Did I just fall asleep!?”  I replied with a sharp, “Heavens no, mother, you just died.  Minh says you do it two or three time a day. But, sooner or later, you always return.”  She laughed with me, we hugged, I picked up her glasses saving my sister from finding them in rubble, handed them to her and bid my adieu.  When closing the door, I heard her bellow from the living and, evidently, dying room, “SEE YA LATER!”  I thought to myself…….. hopefully, sooner.  She always makes me smile.