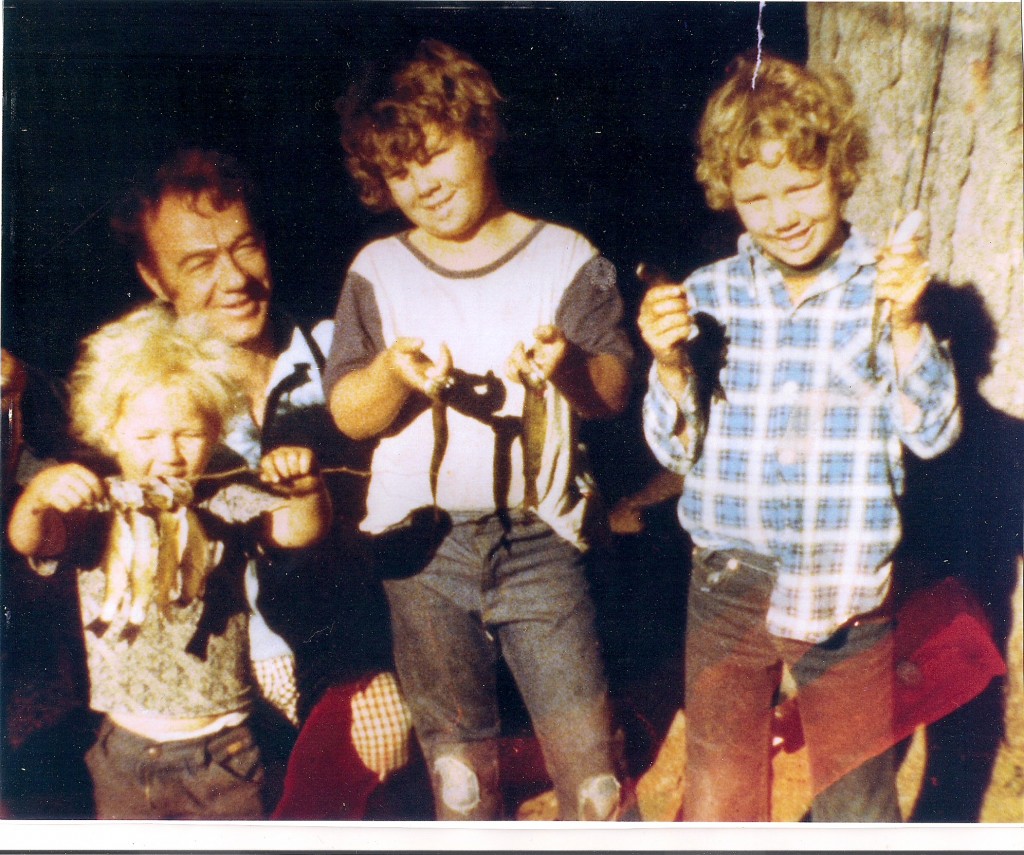 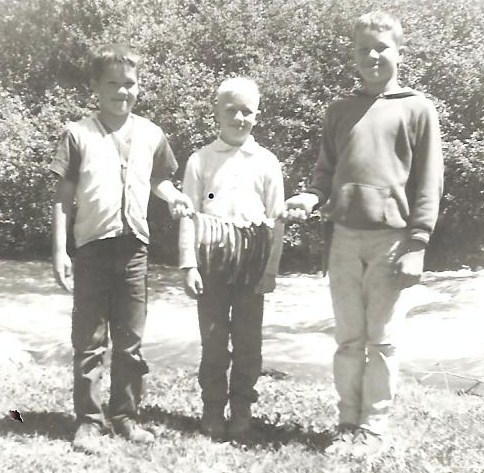 I will refrain from saying these pictures are worth a thousand words,  just a few billion. Initially, I wanted to provide a hocus focus, requiring the viewer to recognize the differences in these two pictures.  I will provide you a hint on one of the secretive details;  our father was in one of them.  It’s hard to spot.  He must have been the photographer for the black and white picture, and why the hell do these guys look so impressive standing at attention in the picture below?  My brothers Greg, Tom and I are in the picture with our father, taken a mere twenty years after the photo of my brothers Mike, Steve and Glenn.   The other brother, Aaron, is living in a place called Driggs, Idaho….we think.  Clearly by the time his thirteenth child (me) was born, our father no longer tried to institute a hygiene code on fishing trips.

Always being embarrassed and picked on with regard to my hair, I now wish to pick on my older brothers, Tom and Greg.  Commonly referred to as “Toe Head”, I was agitated and obviously ignoring a mirror on a daily basis. Notice their smiles which seemed to come out of a garbage can.  Notice the pants which came directly from a patch shop.   Tom, an extremely talented man, wasn’t talented enough to tuck in both sides of his shirt.  Greg, additionally talented, was only capable of zipping up his trousers three quarters of the way. I blame this on my mother.  Zipping up pants is something which can only be taught by a mother, or maybe Greg just became bored and tired after peeing in the woods.  My hair speaks, in fact screams for itself. Finally, notice who has the most fish.

We were fishing at Scookum Lake at the time with our next door neighbors, the Jeffries. They were very nice people.  Dad didn’t have a truck, so Bill Jeffries graciously agreed to cram three sons and one friend into the back of his pickup truck with a canopy.

This story begins and ends with pictures, yet there is one ignoramus signature story with which I must conclude.  On our journey back home, I was considerably concerned with making it back home to see my mother.  Therefore, when I sensed we were within a mile of our house, I tapped on the glass of the truck beckoning Bill to pull over.  Keep in mind, we were literally next door neighbors.  When he reluctantly, and kindly responded to my request, probably thinking I had to take a pee, I asked him a simple question:  “Can you drop me off at my mom’s place?”  Bill just laughed and said, “Sure.” My brothers still make fun of me to this day.