“Good news, Britt!  Satan won’t be joining us on our vacation.”

The introductory quoted sentence is far too real to even want to elaborate on, but I feel I must. There are certain mistakes we just can’t take back, my friends.  We can recover, but ultimately, we can’t erase them.  If you wish to read on, take caution, for this is not for the ‘weak’ly reader and it certainly is NOOOO Disneyland.  It’s a cyberspace circus of fears and tears, and there are three main attractions on this global flight to Perdition known as Texting, Tweeting, and the almighty E-mail. These are also the most terrifying.  Amongst dozens of other dazzling features these cell phones possess, they can be utilized for building friendships, enhancing job status, networking, developing serious relationships, and allowing you access to any information you may require formerly found in encyclopedia, atlas or almanac in a split second, right in the sweaty and shaky palm of your hand.  Adversely, they can also destroy friendships, get you fired, divorced, (sometimes in that order) or just plain lost.

-Politicians/Athletes/Celebrities:  We read about, hear about, see and smell every delusional blunder they make just by using their fingers, especially the forefinger of doom leading directly to the most unholiest of buttons……….SEND.  Gives me chills just thinking about it.  Yes, it gives me, not a politician, athlete, or celebrity, just your average cup of Joe the chills because I am quite capable of delivering units of letters to the wrong people making me equally stupid.  I’m also willing to admit it. 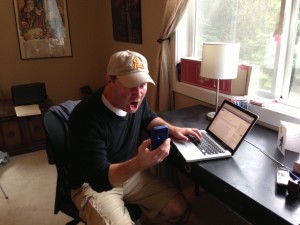 Referring to your friend’s wife as Satan is o.k., as long as it doesn’t land in her husband’s text messaging unit instead of the intended receiver, my wife.  My wife and I were planning a week’s vacation and thought it would be nice to invite some of our friends up to visit the cabin, since there was adequate space.  One couple, our friend and his wife, respectfully declined.  Shortly after, I sent him the accidental text informing him of his wife’s newest name.  This after our friend had done several favors for us in a city three hundred miles away.  Fortunately, the wife being compared to the Princess of Darkness never witnessed the text, and as contrite as I could be, when seeking forgiveness from my friend, I was quickly granted it……almost too quickly.

After breaking up with a girlfriend, (a breakup which took over two months for the check to clear) I developed a relationship with another girl, who would eventually become my wife, Britt.  Britt lived in another city so there were many times when I would simply text during weeks apart writing quick blurbs such as, “I miss you”, and yes, “I love you”.  Isn’t that sweet?  No, it isn’t simple, and it sure as hell isn’t sweet when it floats through cyber city and lands at LA Ex Girlfriend’s Cellport.  When I figured out what I’d done, I quickly called Britt, and said in the most primitive of ways, “I think I did something stupid.”  She understood; the ex didn’t.  The ex wrote back saying, “I miss you too”.  Crud.  I simply decided to move to the city of Britt, and change my phone number.  Ex OUT.

Just yesterday, I made my wife a sandwich for work.  It was a sandwich she loved so much that she decided to text my brother, Glenn, our Real-state agent, and thank him for being so good to her.  Since he hasn’t sold the house we are asking him to sell for us, he was a tad bit confused, but thanked her anyway for the kind words.  A little bewildered, Glenn also wondered why she was so excited to randomly describe a sandwich with such passion.

Profanity is always a nice touch when accidentally texting your priest, rabi, grandma, grandpa, God, or even a new brother in-law. While I was fixing to BBQ one evening, my wife was running late, so she again sent my brother, Glenn, living three hundred miles away from us, a quick text stating, (and this is my first F blog bomb so forgive me) “F@#k, I’m still working…..have I ruined dinner!?” Stop texting my family, Brittney, unless it is business related.

“All’s well that ends well.”  That was an e-mail delivered by one of my friends and fellow employees long ago when I was a middle school teacher.  During a routine “lock down” drill, (we practiced these drills regularly in case there may be a dangerous situation brewing…….no laughing matter) my friend sent this Shakespearian message not just to the secretaries notifying them that all students were accounted for, but to the entire district, with the heading, “LOCKDOWN”.  Let’s just say it sent (send’s ugly cousin) many teachers and administrators at the high school, the other middle school, and elementary schools directly to Panic Land.   Fortunately, for Fiddle Finger Jack, our principal only sentenced him to a month in our Solitary E-Mail Confinement Chamber.  This is when an employee, when wishing to send an electronic mail during a break, must instead find an envelope, handwrite a letter, place a stamp upon said envelope, and deliver it by foot to the proper recipient even if the recipient is only twelve feet away.  Fellow employees refer to it as the “E-Hole”.  A month in the E-Hole is like a year without communication.  All cellphones are also required to be confiscated upon entrance to the place of work.

There are also very profound ones using vernacular which could either offend the incorrect recipient or just confuse them.  My friend, D Dub, thought he was e-mailing his best friend, whose first name begins with Na, yet his forefinger of the damned was too fast on the draw sending his “rude ass tittays” phrase spiraling out of control and crash-landing on one of our own congressional staff members in Washington D.C. whose first name begins with Na as well.  D Dub still works in Texas.  (does anyone know what a “rude ass tittay is?)

Twitter-verse, the only ride I’m too scared to get in line for, is one I don’t think I’ll ever touch.  This blog is as close to embarrassing myself as I want to get.

I left out one of the cyber kiddie rides known as the Voice Recognition Roller Coaster of Confusion.  When you receive one of these texts, you forgive and dismiss their mistakes knowing the person sending it may have just suffered a concussion or consumed a case of wine in their garage just prior to message delivery.

Conclusion: Watch where you put your finger.