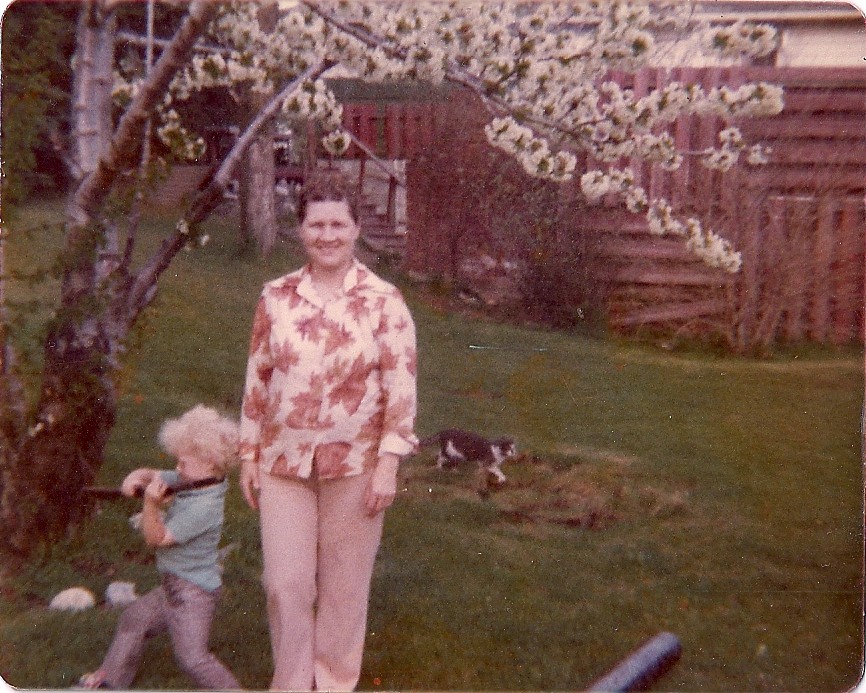 Once maintaining the status of being an April Fool, you can see this picture is no joke.

Turning a gun into a bat seems like it should be fictional.  It’s not……..not where I grew up.  Where I grew up, everything I touched turned into a bat.  Brooms, branches, rakes, fence posts, t.v. antennas….. I’m telling you, I was a magician when it came to turning anything into a baseball bat.  Once, I even turned a rabbit into a bat after pulling it out of my frizzy blond locks.  However, one can argue that turning a gun into a bat was my greatest trick when baseball’s opening day was lurking in our backyard midst.

In the picture, it is unclear whether whatever I was swinging was a toy gun, or a worn down bebe gun, but I do know that I’ve never shot anything in my life, nor had the desire to do so. According to my mother, I was using this gun as a baseball bat while attempting to chop down our cherry tree. She never told a lie.  Since I was only about four, axes were not allowed to be in my hands, nor were they allowed to be in anyone’s hands in our neighborhood, unless you were actually chopping wood.

My mother and I had a wonderful relationship.  After all the siblings were off to school, she did her best to keep me busy.  Keeping me inside the house was not an option.  Playing card games such as “memory” could only last until about noon.  That was usually about an hour before baseball’s opening day began for me.

Cable was not available in those precious days, so my mom made certain her youngest son would live it in our backyard.  If you look closely at Gannon Stadium, you can recognize an old school ball yard.  We had it all.  First base was the root of a tree.  Second base was a thorn bush, which is why mom always kept a first aid kit handy.  Third base was the cherry tree which is depicted in this picture.  Evidently, home plate was anywhere I wished it to be, because if you look at the landscape of our home, there was a centerfield home run fence known as “The Red Monster”.  (It was our west coast version of “the Green Monster” located at Boston’s Fenway Park) Judging from the direction I was swinging the gun, a centerfield homer was not an option, so the scouts in our yard taking this picture had serious doubts about there being anything in between my ears and beneath that ghostly white hair.

I have absolutely no idea why I was trying to chop the cherry tree down with a gun, but I was outside in the spring with a mother who just tried to keep me occupied before the rest of the gang came home for dinner.

My mother, Margaret, loved the game of baseball;  she just had never played it……..until I convinced her that no matter where she threw the ball, I’d swing at it.  I recall running across the yard, fifteen feet out of the gunner’s box attempting to hit her dangerous attempts to toss it across home plate.  Sometimes, I would end up in one of our neighbor’s yards.  That didn’t bother me or my mother because one of the neighbors would always smile while providing me with the carrots she had planted months prior to the ball mom planted in their dirt, knowing my mom needed a bit of a break.  Food, even vegetables at that time, was the only deterrent to baseball, but only on a minor league level.  This neighbor was lucky not to have planted onions.  They are far too similar to a baseball.  The carrots, I could eat.  The onions were far too tempting not to hit, unless of course, they were sautéed.

Last night, I watched a baseball game with my brother, Mike, because mom wasn’t around.  She was too busy sleeping, dreaming about a day where she could balance baseball with “Dancing With the Stars”.

Last Monday, our official opening day, I called my mom and reminded her of those very special days when she displayed such kindness and affection.  The bond remains, and she has definitely earned the right to change the channel from a game to dancing.  Neither of us are April Fools, but we are foolishly in love with this time of year.