(Written with respect to the television show, “In Search Of”, narrated by Leonard Nimoy)

Some of us earthlings reach a certain time in our lives when we must be given the formidable task of searching for the chair which is most comfortable in the living and dying room.  Some wonder when the Early Bird Special price and time will drop, instead of rise, with inflation.  Some just wonder when.   Others search for an owl.  Now, that’s living.

Personally, I’ve given up the hope of finding a Sasquatch on T.V..  It’s not that I have little faith in seeing one on our color set.  Rather, it’s just that I have no faith whatsoever.  I believe that provides me the right to simply give up and search for something more fathomable, like a bigger t.v. set.  All I have to do is wait for the next tax refund to do so.

My sister, Anne, has asked not to be named in this simple story of exploration, perspiration, gallantry, mockery and photography.  She only wishes for me to send a truthful message to those doubting her for those six expensive, time consuming, and wet years of her life, searching for the elusive and alien like barred owl. 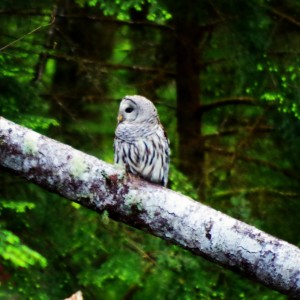 The barred owl is as intimidating as any winged and eerily taloned bird of prey.  Unlike the Sasquatch which is considered a “cryptid” (animals  believed to exist by those using narcotics, but never proven to exist in the sober world of science) the barred owl has been accepted by the scientific community, even if most of those scientists never actually observe them in the wild.  They are wildly difficult to spot, especially, like anything else, when one is specifically searching for it.  Armed with a kayak, paddle and a camera, my sister was determined to capture a picture of this shrewd marvel of aviation.

Kayaking, for my sister, began as exercise and continued to blossom, along with her well toned arms, into a blessing.  It was a blessing of outdoor beauty, a beauty some imagine only while watching the Discovery Channel, Jurassic Park, or Gilligan’s Island.  Waterfalls, sinister trees, hidden caverns, and birds……..yes…..those majestic birds.  Many of these birds she would witness on a daily basis, but there was one she heard too many times just before dawn and dusk.  The sound she heard became a dream for her and a nightmare for others.  Much to her husband’s dismay, she would hum the notes in her sleep.  Leaving her cabin each morning and evening in search of the barred owl, she was determined to find one sooner or much later.  The search was on.

Six years of building your muscles on a kayak, while failing to capture a picture of your bird of prey, can drive anyone insane.  For her, it became her Winged Whale.  My sister became a woman of prey.  It was enough to create skeptics amongst her Lake Cushman community.  She tried to ignore the naysayers when they’d whisper, “Poor Cao.  (Cao is her last name.) People have wasted their whole lives trying to find that bird only to spend their last remaining years in a nest eating mice and mimicking the notorious warning cries of the barred owl.”  Others were less discreet.  “Poor Cao, my talon!  She’s got Owl fever and she needs to get over it.  The whole lake is making fun of her.”  Each member of her family would look at her with concern.  Had this obsession gone too far?  Six long years of waking up at five in the morning to the hooting of this owl.  Six years of paddling away in her kayak while her family waved goodbye, wondering if she’d ever return.  Six years.

Year one:  HoohooHOOaaw!  She hears it each morning, and most evenings, but no physical evidence.  Family and friends support her quest and commonly ask her if she has found it.  Encouraged by their interest, she explains how difficult it is to find one in the wild.  She looks forward to finding it by year two.

Year two: HoohooHOOaww!  No physical evidence.  Friends and family members continue to ask, enthusiastically, if she has finally captured a picture of her puffy headed woodland friend with large brown eyes.  Still, she only hears it.

Year three:  HoohooHOOaww!  The cry remains, but no physical evidence.  Because of its unique war cry, some people call it the “Al Pachino Owl” when it only can stammer a “Hooahh” stolen from the critically acclaimed movie, Scent of a Woman.  Some scientists interpret this cry by documenting the sound as reminding them of a question. “Who cooks for you?  Who cooks for you all?”  My sister takes this literally and responds while entering her kayak, “I cook for me!  I cook for them ALL!”   Her husband starts to believe she is crazy and begins taking longer shifts at his place of employment to avoid questions from neighbors.

Year four:  Still no physical evidence.  Quietly, she presses on.  People stop asking questions.  Even her own mother, living with her for support, begins to doubt her daughter’s quest.  But, as long as mother is fed and put to bed at the proper times,  mother simply resorts to prayer.  “Dear Heavenly Father, if you give a hoot, please allow my daughter to catch just one photo of this bird for crying out loud!  I’ll say AMEN when this happens.”

Year five:  Mom’s prayers have not been answered, yet her prayers are as consistent as her daughter’s daily voyage. The incessant hooting continues.  People in the community avoid the subject of wildlife all together when she is present.  This motivates her further.  She feels as if  she is catching a fifth and sixth wind beneath her paddles. 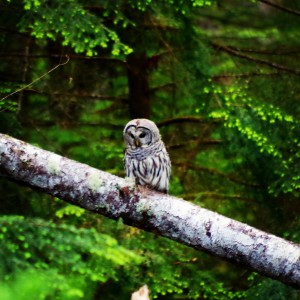 Year six:)  HOOHOOHOOAWW! HALLELUJAH!  Darkness was falling in late May 2014.  Her husband, fishing from a distance, calls for her to come back to the cabin.  She tells him to go to Hell.  (She didn’t, but wanted to.)  Although her heart was dancing, her body, every last bit but her hands, remained still.  Her dazzling blue eyes stared directly into those of the elusive barred owl.  One snap away from physical evidence.  One click away from completing her journey.  One iconic forefinger depression from proving her sanity to all those skeptics.  This was her purpose.  It was only a matter of when.

I’d like to tell you she tipped her kayak over while succumbing to shock and ruined her three thousand dollar camera in the process.  Her husband would like me to write that he saved her from the lake’s frigid waters while she shouted above his outstretched hands, “Look, he’s flying away,…….forget me…….get the camera!!!!”  But, I can’t.  She got her shot, and she took it.

When my sister gets an itch, she scratches it, even if it takes six years to relieve it.